5 Reasons why you should go to Coachella

Most of you have probably heard of this festival before. The past few years it has become THE place to be for celebrity sightings. Apart from me not seeing 1 celeb, I think the lineups and art installations are way cooler anyways 😉 This year was my first (and definitely not last) visit at Coachella . I was able to experience the great music, awesome atmosphere, desert heat and a mini-dust storm.

So, in April of this year, for the first time ever, I made my way to the Coachella Valley. Before going there, I asked myself the questions that probably many of you have asked yourselves: What’s so special about Coachella? I’ve made a small (well, I wanted to keep it small, as you can see, it really isn’t) list and hereby give you 5 reasons why you should go to Coachella.

Yes, the first wave of tickets goes out beginning of June. The line up isn’t even out at that point; still the tickets usually sell out really fast. But, with a festival that big and so many acts to choose from, I can almost guarantee that there’ll be something or everyone. The headliners are usually the really big names – most Swiss festivals can just dream about having acts like that on their stages.

When going through this year’s lineup I found 26 acts/bands I really wanted to see. Yep, whoever’s been to a 3 day festival knows, this is close to impossible. It really wasn’t, for me. But I did get to see most of the bands I wanted to. Here’s my Top 5 of the seen shows:

Obviously I’ve seen many more, but if I’d start to list all of them, you’d be reading until next week. The headliners this year were Radiohead, Lady Gaga (filling in for Beyoncé) and Kendrick Lamar. I’ve seen all 3 of them, but have to admit, they really didn’t do much for me.  Maybe it was because I was so exhausted by the time they played, or because I only got to see them from very far back. But that’s the compromises you need to make, if you have other acts you want to see even more badly…

I was surprised by how clean the entire festival grounds were. Even late at night, I could barely see any trash lying around. Wish I could say the same for Swiss festivals… The cleaning staff did a great job, you could see them all day, making sure we’re able to enjoy the festival in a clean environment. 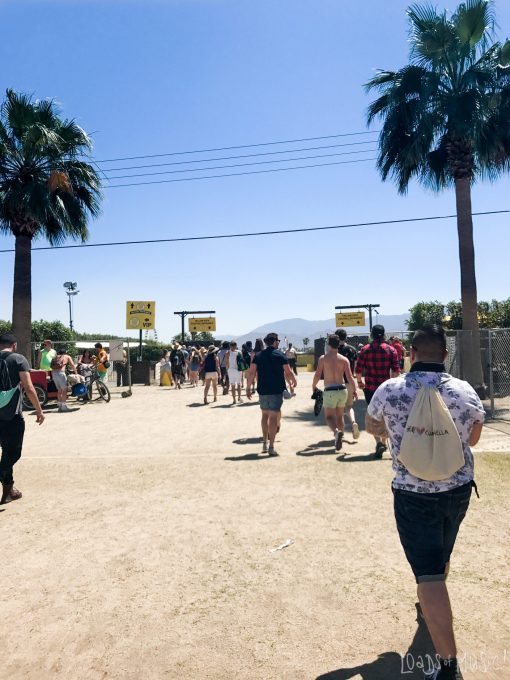 The organization in general was great. The shuttle bus for example. I had the shuttle pass and really never had to wait longer than 2 minutes for a bus. I had booked my hotel in Palm Springs, so it was a little drive away from the festival grounds. Unfortunately it wasn’t one of the hotels with an own shuttle bus stop, so I had to find a Park&Ride location close to me to catch the bus. Not a problem though, the next location was just a 10min drive away. Once I got to the Agua Caliente Casino Resort Spa (the P&R location) I quickly found the big parking lot with all the busses and within not even 5 minutes I was in the bus. There are always several busses waiting in the parking lot, so even if you just missed one, the next one was there already. For the way back you could be a little more unlucky. Depending on when you’d leave the festival though. I personally never had any problems or longer lines. My recommendation: if the headliner isn’t necessarily your favorite, you can easily leave a bit earlier (before the set ends), like that miss the big rush. Most people leave the festival grounds right after the headliner, so the lines at the busses (or also taxi/uber

stands) can get quite long. Since I wasn’t keen on waiting for ever, I left a bit early and never had to wait more than 10 minutes for the ride home. After such a long day in the scorching heat, being able to hop into a cooled down bus was very welcome.

The thing with the lockers… Rent a locker in advance! Do it… in advance! The lockers tend to sell out rather fast on the first day. So you have the possibility to rent it before you even go there. You pay online and get a receipt that you need to print out. Once you arrive there, you show the receipt and seconds later you have the key to your locker. There are different sizes, so depending on what you’re planning on taking with you, you can go bigger or smaller.

I chose the middle size, perfect for a little backpack ( I think even a big one would have fit fine). Every day I headed to the lockers first, put everything in there that I didn’t need most of the day or that were just emergency products (contact lense solution, band aids, car keys etc.)

If you have a normal GA ticket (general admission, so everything BUT VIP;-)) unfortunately doesn’t get all the goodies. But the selection of different foods and snacks is still great. You can get the typical festival food (like hotdogs, burgers and fries etc) but also some more unconventional gourmet foods (like oysters, poke). But as mentioned, most of those special foods are found in the VIP areas. Not to worry though. In the GA area you’ll get more than enough other foods. Anything from lobster rolls, pizza, chicken sliders to fries, pad thai, enchiladas, paella, pulled everything sandwiches, fresh fruit etc. So nobody will have to starve at Coachella. 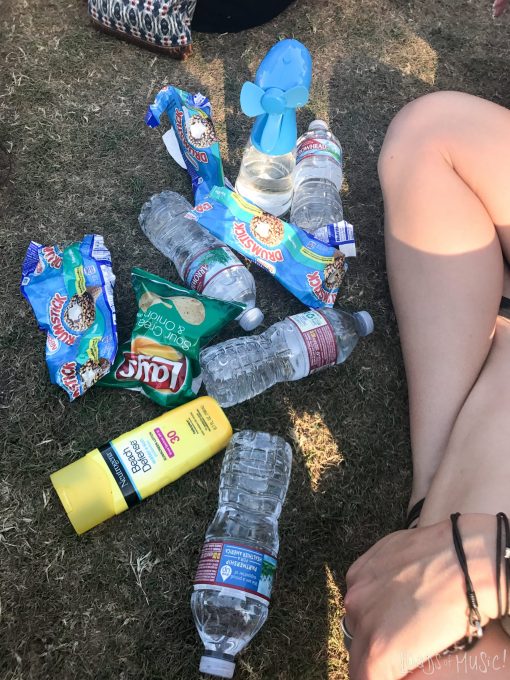 Drinks… Here in Switzerland, or basically in most of Europe the drinking thing is a bit tricky. You easily spend 5-7 bucks for a simple bottle of water.  At Coachella you have water stations at certain locations where you can just fill up your bottle – for free! Oh and you are allowed to bring bottles onto the festival grounds, just make sure they’re totally empty when you enter the security area. You can then just go fill it up once you’re checked and inside. Especially in this climate it’s super important to stay hydrated. The desert heat is no joke, it gets super-hot and you WILL be losing all your fluids within no time. So yes, please drink enough. I’m usually the person that doesn’t drink enough. But here, I made sure I always had a full water bottle in my hand. I drank up to at least 6L per day, which I think I sweat out within minutes ha!

There are several “Beer Gardens” throughout the festival grounds. That’s the only place you can get alcohol. And it’s also the only area you can actually consume alcohol. You will not be able to take any alcoholic drinks out of there. Of course there will always be rule-breakers. I briefly met a young guy that started pouring his contact lens solution in his red bull. Or so I though… Turns out, he smuggled alcohol into the festival – in the lens solution bottle. People get creative here 🙂 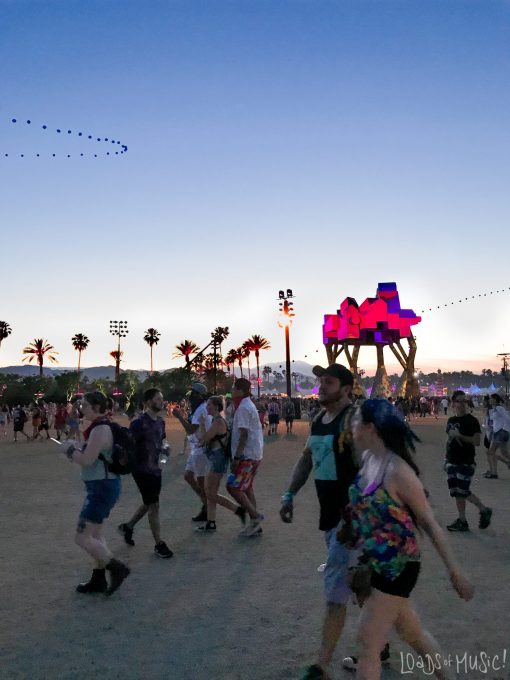 Yes, for some the Coachella weather can be a blessing or a curse. Until a few minutes ago I wasn’t quite sure what side I was leaning towards. But now, thinking about it, I have to admit, even for me it was a blessing. Thinking about how most festivals here end up in a huge puddle of mud. I think I prefer the heat and dust. The temperatures sometimes hit 40°C or even a bit higher. This is crazy and even uncomfortable at times, especially if you are stupid enough to get sunburnt a few days prior to the festival (yep, I’m talking about myself). Buuuuut, if you’re lucky you can get a nice spot in the shade of the different art projects standing around. My favorite spot was actually the Gobi tent. There was always good music and if you sat towards the front but on the side, there was always a little breeze going by. But also the big beer garden on the left side of the main stage was a nice spot. Big palm trees made for some nice shady spots, where I was able to put on more sunscreen or just chill. At night the temperatures usually dropped quite a bit. But during my weekend, it was still warm enough to not have to wear a sweater.

But once I got on the bus, I was happy to have a light sweater with me, since the AC was usually turned up all the way (but apparently there are also busses with no AC – so I guess I was lucky ;-))

Despite the almost unbearable heat, dust, sunburns, and fight for shade: it was absolutely amazing! So much great music, a very special (in a good way!) atmosphere, so many pretty and good-looking people (yes I know, we have them here too, but usually you don’t have that many of them in one spot). I’ve taken home so many great memories from this festival. I have to admit, every festival I’ll be visiting from now on, has really big shoes to fill. Will I go to Coachella again? HELL YEAH!

Here are some more impressions (please excuse the quality, only had my cell phone with me :)) 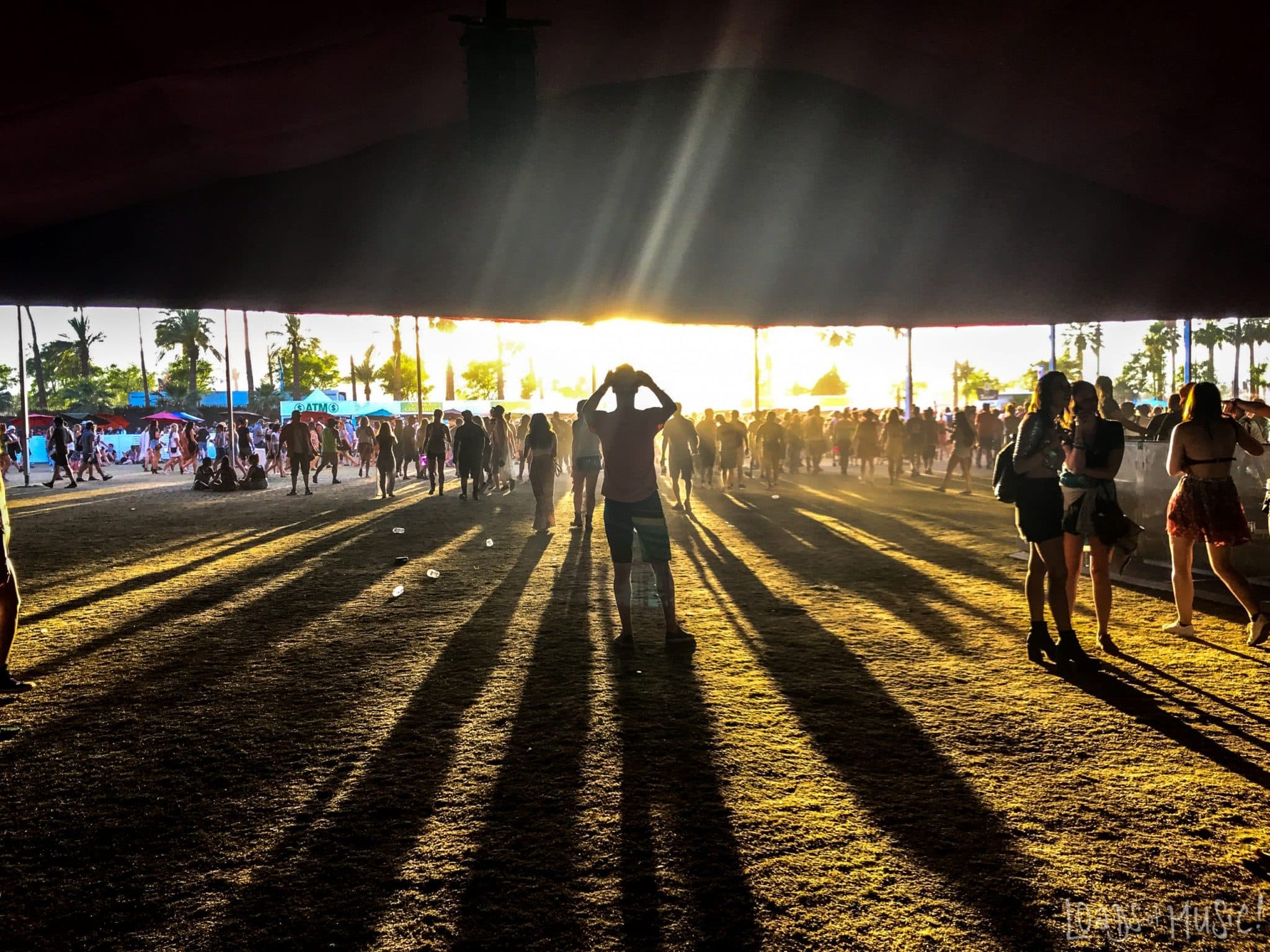 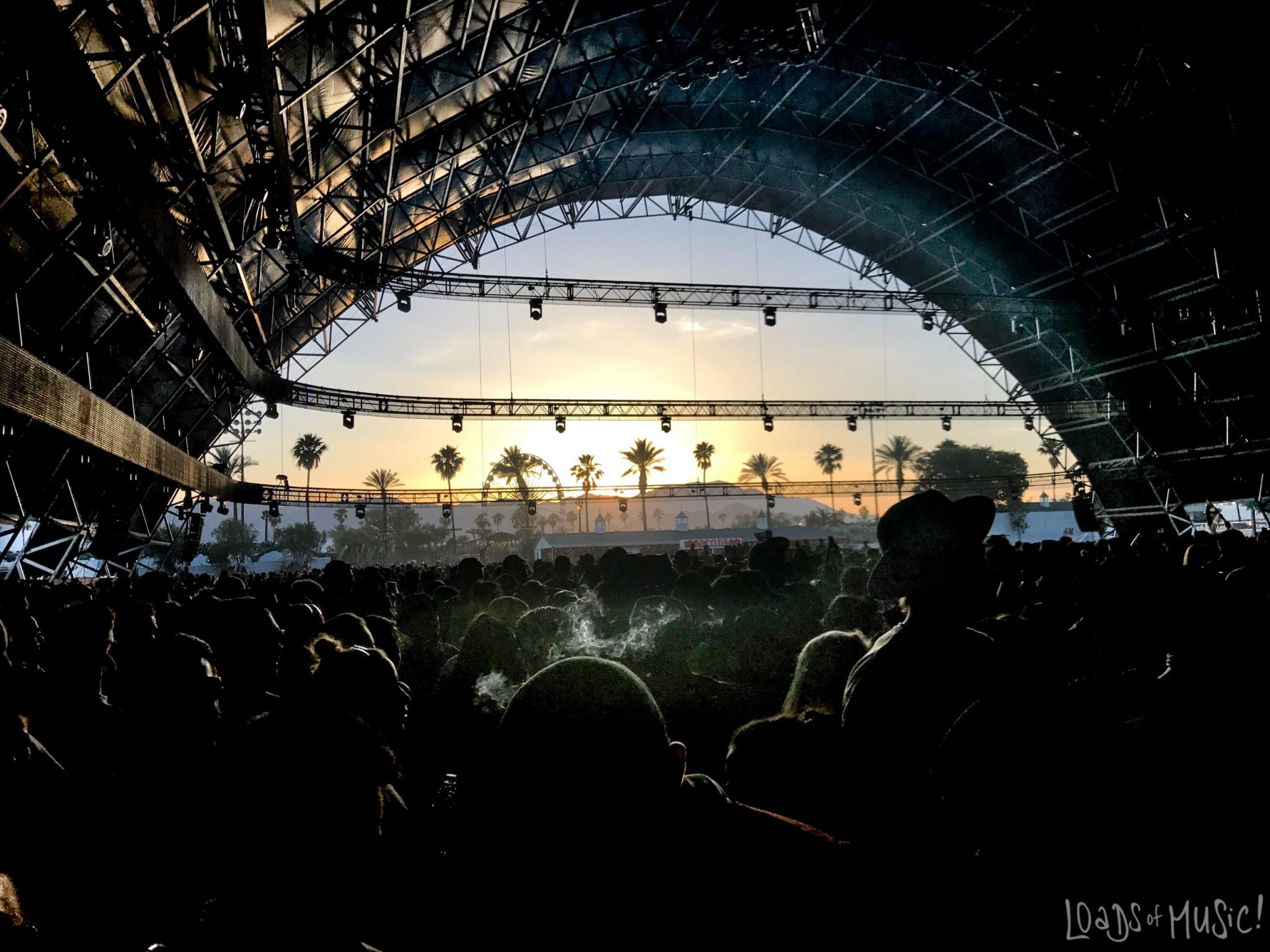 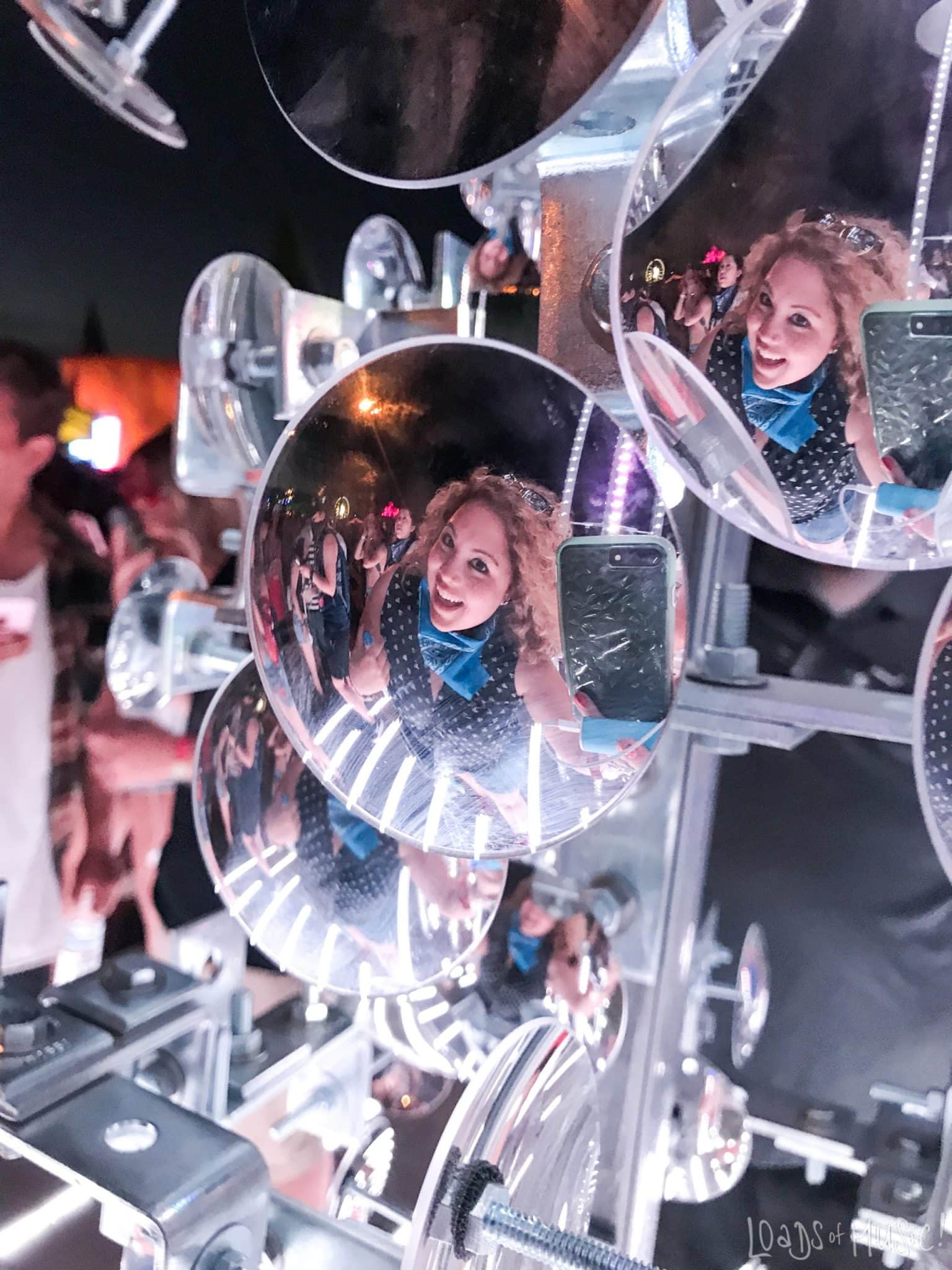 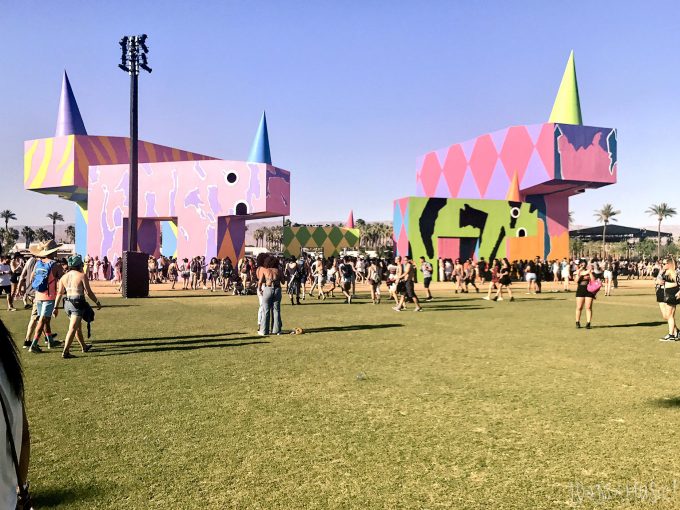 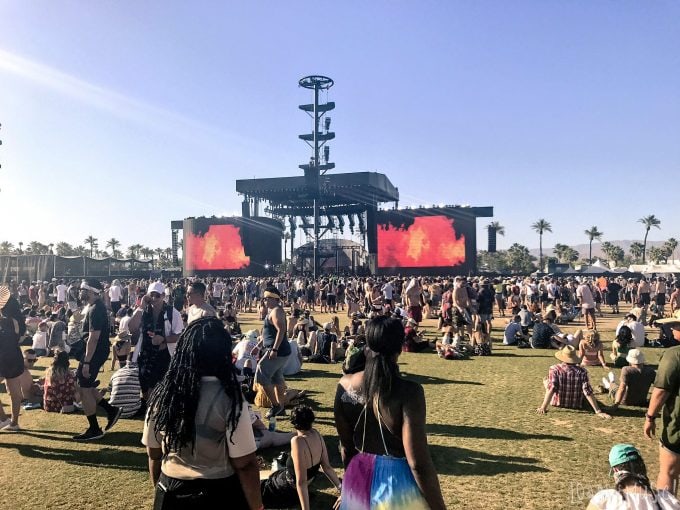