Well, have you ever heard of Tom Freund? No? Honestly, I haven’t either until a few days ago. Thanks to Joshua Radin and social media I found my way to El Lokal to see Tom.

Actually the in LA based Tom Freund isn’t really as unknown as you might think. He’s been on the road and working with people like Ben Harper, who has also produced one of Tom’s records (the one you can actually win here). In Switzerland he was able to build up a little fanbase, which was pretty obvious when I walked into El Lokal – it was pretty packed.

Support Act and drummer with the mainact

Adam Topol from Reno, Nevada opened for Tom and performed some of his original songs. Jack Johnsons regular drummer has a lot more talents than you’d think. I’ve really enjoyed Adams set. I liked the songs. Will need to check out more sometime… Even though the guests on the upper floor were still a bit loud, the fans downstairs seemed to enjoy the music.

Guitar, to ukulele to bass and over tot he piano

A bit later it was Tom Freund’s turn. Accompanied by Rodrigo Aravena (who btw lives in Zurich!) on the bass and Adam Topol on the drums.

Tom’s voice reminded me of Chris Barron, a lot actually. The music though was a bit different. I loved the variety. There were some very rocky tunes but at times it seemed like there was more country/folk and americana influences. Tom changed his instruments like other people would change their underwear 😀 for me, being totally talent-free when it comes to music, it’s incredibly impressive how some musicians can play so many different instruments. No matter what if Tom was playing the piano, guitar, ukulele or the upright bass, he totally rocked it!

I love how the 3 musicians totally got into the groove. There was a great little jazzy jamsession, they took requests. The fans totally loved it and had a great time. Some were dancing, some were just standing there taking it all in… I had a great time too, I enjoyed the music and loved to look at the fans and see how they were all in awe and dancing their butts off 🙂

As promised, you now get to win a signed CD! „Collapsible Plans“ – the record that was produced by Ben Harper himself, has most of the songs that were played at El Lokal, and some more of course. 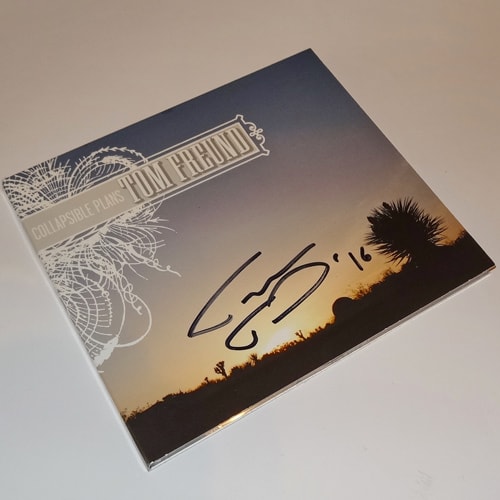 This is how it works: