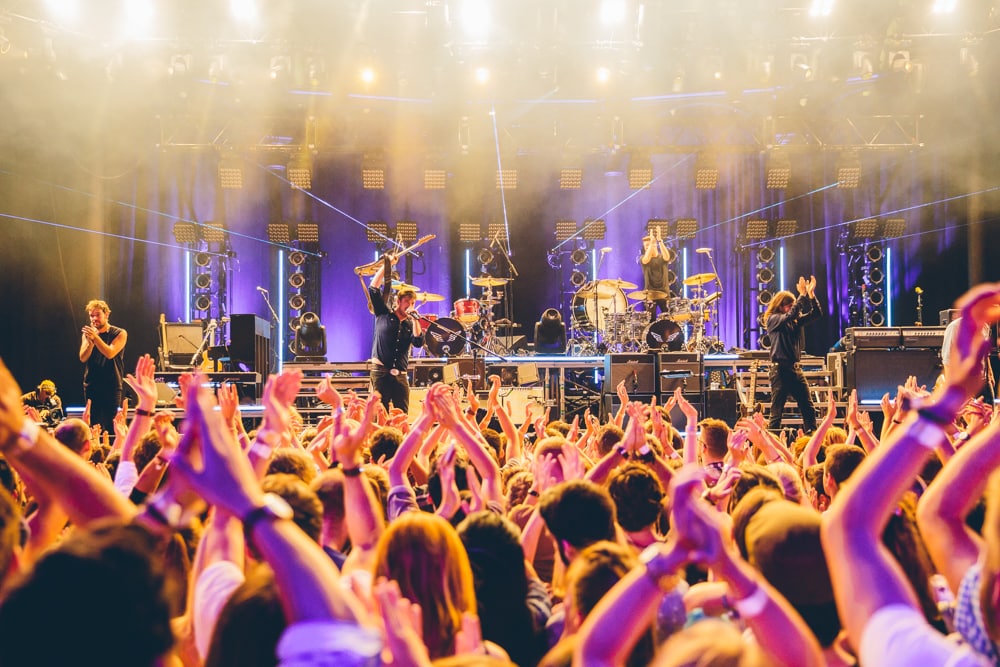 Yep, this really happened. Last Sunday I was at the Apple Music Festival in London and was able to check out Mumford & Sons live at the Roundhouse. That was quite the experience, let me tell ya! I’ve been to many concerts in my live, but this one will forever be a very special one for me.

Like many of the lucky contestant winners, this was my first time at one of these legendary shows. The Roundhouse is one of a kind. A great location with an absolute stunning architechture – very nice to look at.

Jack Garrat was the support act on Sunday, so before Mumford & Sons made their way up tot he stage, Jack did his very best to warm us up. Jack Garrat – a name you should remember. I really enjoyed his set. It might not be everyones cup of tea, but I thought he was pretty awesome. Go check him out and let us know what you think.

Then, just a little after 9pm, it was time to dimm the lights and get the main act on stage. The little screens on the side of the stage doing the countdown, gave me goosebumps. It was pretty exciting being able to count down to 1 live (instead of doing it home while watching the stream). The atmosphere was a little low on energy in the beginning. The band opened their set with „Snake Eyes“. They seem to want it to start out a bit calm…

Even though the die-hard fans around me were dancing and singing along, I can imagine it’s not an easy task to get the mood and atmosphere up to 100 at events like this one. Tickets could only be won, which means, actual fans might have not gotten in and it is possible that the bigger part of the crowd either don’t know the band too well or they might just know their big radio-hits.

After a while th crowd did warm up though, along with the songs that started to get a bit more rocky. „I Will Wait“ was definitely a crowd pleaser, everyone started singing along and clapping – makes sense, it is one of the bands big radio hits. Right afterthis, leadsinger Marcus Mumford takes a seat behind the drums for „Lover Of The Night“. It keeps surprising me how some musicians can just play it all. While I’m over here, not even being able to snipp to the beat 😀

I really liked the mixture of slower and more upbeat and rocky songs on the setlist. Sometime during the show, Jack Garrat was invited back up on stage to perform a great cover oft he Eurythmics Hit „Sweet Dreams“. While most people at the Roundhouse totally loved songs like „The Cave“ – I had another little personal highlight. „Cold Arms“ was played in a special unplugged and stripped down version (unfortunately you cannot see this on in the livestream). During the song it was actually dead silent inside the venue, everyone was really enjoying the song.

We had to wait quite a bit to hear „Little Lion Man“. This was only played during the encore, but what a success it was. I do have to admit though, I was pleasently surprised that all the other songs, which might not be the typical Mumford & Sons songstyle, were pretty great live too.

All in all it was a very successful evening. I was finally able to see Mumford & Sons live, but not only that, I was able to see them at the Apple Music Festival. This will certainly be one of my concert highlights of the year. So at this point, bit shout out and thank you to Apple and Scream Promotions for letting me be part of this. It was great!

So here are a couple of cool pictures. This time I obviously totally failed at taking pictures. My little point&shoot camera was just not good enough with this lighting. But as you can see, the pro’s did a pretty good job.

Oh and don’t forget, you can stream the Mumford & Sons show (and all the other ones as well) through your iTunes account. That’s what i’m going to be doing in a second 🙂