Interview with Cody Simpson in Zurich 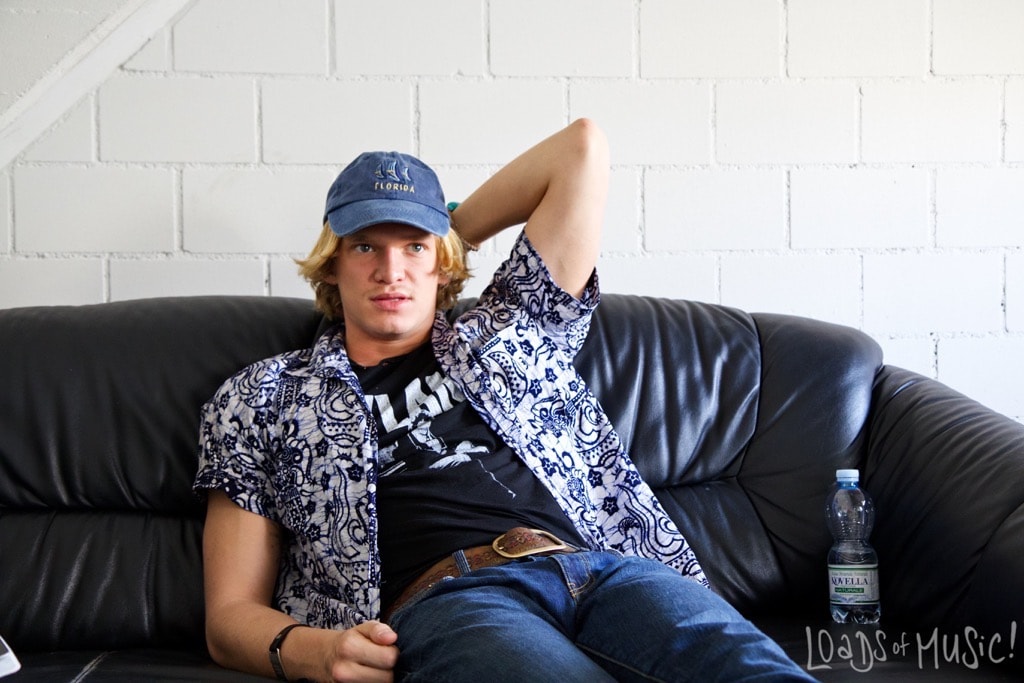 Last week we’ve had the awesome opportunity to sit down with Cody Simpson, a young australian musician on tour in Europe at the moment. We were brought into a small room on the top floor of the venue (Dynamo in Zurich). Cody seems to just be hanging out with the guys. Sitting on a couch, all relaxed and laid back.. Just like his music.

So, if you want to know what’s on Cody’s bucketlist or what kind of fan-presents he likes the most, keep reading…

Welcome to Zurich! How do you like it here, so far?
Great, we had fun last night! We just walked around, went to some places. We had a good time.

Awesome, so let’s get this started! For those people who might not know who you are, how would you describe yourself in just 3 words?
Uhm… Hmm I’m not sure, I guess pretty laid back. Hmmm I don’t know, I find it hard to talk about myself – don’t really know what to say.

What about your music, can you describe that in 3 words?
Oh yeah, that’s much easier for me. I would say, again, laid back. Feel good music – it makes people feel good. Organic and uhm, yeah, that was 3, right?

So let’s talk about the split from your record label, I read that was mostly due to creative differences…
Yeah, that’s right. And a lot of personal frustration for me. You know, a young kid, signed to a major record label. You don’t really have a lot of creative control. And I just exactly in that situation. I felt trapped as a musician, I needed to get out and do it my own way, start my own little label and distribute my music through that. I mean I still have and do my music, I have my social media following and I can share my music and my art with the people out there. The only thing that the label helped with, is getting my songs on the radio. But then again, they weren’t choosing the right songs, just the ones they thought would be a big hit for the next couple of months. I was kinda glad none of the songs actually made it that far. I now have the chance to refresh myself and find my authentic, creative self.

So you basically have freedom and can do pretty much what you want?
Well yeah, and it’s also a nice change, it’s incredible… You know, uhm… Well, it’s kinda hard to explain, but I feel so relaxed now and I can stop caring. Not in the sense of not caring about my music, but there’s not as much pressure on me anymore. I stopped putting pressure on myself too, so I ended up being so much happier and being more creative too.

Nice! So, the new record that’s coming out on June 23rd… I’ve already listened to the songs you get when pre-ordering – I like what I’ve heard so far. What else can we expect, any big surprises?
It’s all pretty similar to what you’ve heard. As for the instruments, we’ve tracked everything in like 2 weeks. We’ve written everything in Malibu and then went into a studio in Hollywood to record it all with the band. It all went down so quickly and easy, we knew the songs were great and we just wanted to get them down. We weren’t to focused on them being totally perfect but making sure they felt good. There are obviously a couple mellow tunes as well as some that jam a little harder. This really is the album that I needed to get out of my system.

We asked our followers on Twitter to send us their questions, and wow, you’ve got a lot of fans out there, especially japanese fans, they blew up our Twitter account!
Oh wow really? That’s amazing… It’s funny, like, depending on what time I go on Twitter, I get the fans from all the different timezones and my timeline is filled with so many different languages.

We’ve received some impressive artwork from some of your japanese fans too…(I’m showing Cody the pictures I’ve received from @cody143mika)
Wow, that’s amazing… And wooooah, are those their faces in there?! So cool!

One question from Nora in Finland was: Tell us something every human should have done at least once in their lifetime.
Skydive, I’ve done that before. On New Years Day this year. I was in Dubai and it was just amazing. I could see the Palm Island from up there. I think it’s just important check every box on your bucketlist. I’m definitely gonna make sure I do everything on my list.

OK, so tell us, what’s on top of your bucketlist then?
I want to do a free skydive, like not doing a tandem one, but jumping out of the plane by yourself. I want to do that, that would be amazing.

Another fan question came in from Jana in Germany. She (and many other fans too) want to know what happens with the presents you get?
I try to keep as many as I can of course. But sometimes the bus gets a little full. I read them and look at them, soak it all in. I really enjoy reading letters from people, it gives you a better understanding of the way you make people feel. And it makes you feel good too, when you realize that the things you do and create are actually making people’s lives better. The purpose of this album is to make people happy, make them feel like they can be whoever they want and need to be.

Cool, I think you’re doing pretty good. The fans outside the venue are definitely having fun and seem to be super happy already 🙂

We’ve started a couple of sentences, please try to end them:

While waiting to go on stage, I… clear my mind of any distractions, usually I sit down on the floor, cross my leg and kinda meditate and clear everything. I’ve noticed that my best shows are usually those where I go up and don’t think about anything else.

If I ever get to move to Switzerland, I would… date a pretty swiss girl and probably end up blowing out all my savings because everything is so expensive over here.

When I see an elephant, I immediately think… uuuhm… Wow big! Want some peanuts?

The first thing I do in the morning… Open my eyes…

Well, duh.. of course, what about after opening your eyes… get out of bed, brush my teeth and have a shower.

That last answer wasn’t quite what we were going for, but hey, he’s got a point there… 😀

Well, that was it, our time was up and after taking a quick picture with Cody we packed our stuff and left the building again. In the meantime the queue outside grew further. A lot of young girls were waiting outside and probably couldn’t have been any more excited. Unfortunately we couldn’t stay for the gig. But we’ve heard it was pretty fun.

If any of our readers were there, let us know what you thought and comment on this blogpost.