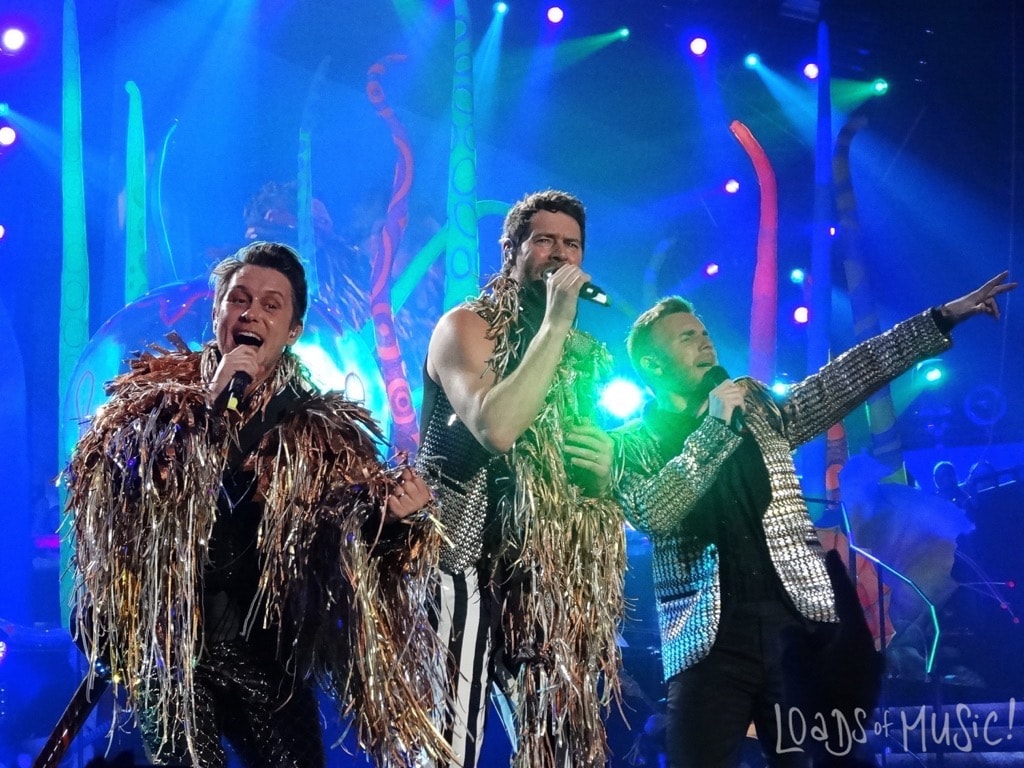 The day has finally come. Last week Nicole (from princess.ch) and I flew over to Birmingham to go see our first big love. Of course I’m talking about Take That.

The first surprise was that not Ella Henderson was going to be the support act, but the british band Lawson. I’ve heard of them before, but never really paid much attention to their music. This has definitely changed after this set. I must say, they were pretty good, I guess I’ll be going music-shopping soon… You can find a couple of pictures on my Flickr account.

A little after 8.30pm the lights went off, or let’s say, they came on with a big bang. Take That are about to take the stage. Dressed in super colorful suits, an extremely wild and cool stage set and of course a bunch of super talented dancers. Only a few minutes into the show, everyone was on their feet – the brits definitely know how to enjoy a concert 😉 Also, after a few songs only, Take That have probably visited every inch of the huge stage. There was a mainstage with 2 floors and then the big runway through the arena, from one side of the mainstage to the other.

As you can imagine, the setlist was awesome! A song for everyone. The guys did sing a couple of the new songs off of „III“ but of course, the older songs made the audience go crazy the most. During „Greatest Day“ the first round of confetti was blasted into the air – I’m still finding confetti in my clothes 3 days later… 😀

They’ve performed one hit after the other. One highlight followed by the next. I’m telling you, this was one incredible show. Super colorful suits, golden seaweed kind of costumes or super long white jackets were shown off. During „The Garden“ the entire set changed to an underwater world, during „Relight My Fire“ the B-Stage actually caught fire. We were all amazed, I did see many people standing there with jaws dropped, me included.

One of Nicole’s highlights was probably „Flaws“. Gary stood on the mainstage, all by him self, only one big spotlight on him, while Mark and Howard were dancing their butts off all around the entire stage. A pretty emotional performance.

Towards the end of the show, no surprise, it was time for the big hits. Be it „Back for Good“ or „Pray“, including the original dance moves, they got the audience cheering, screaming and dancing! For most of the people in the audience, Take That shows bring back many many memories from earlier days. Even though I’ve seen them a couple of times in the meantime, I still get goosebumps everytime and find myself thinking about the good old times. And every single concert is an incredible experience.

My personal highlight must have been „Rule the World“. This has always been one of my favorite songs. During this one, the arena lit up beautifully. It seemed as if every single cell phone or lighter was up in the air. Check out my video on YouTube. But of course, also the little bike-ride over our heads will forever stay in my head. Such a cool idea!

But of course, as everything, there’s always and end. And this one came way too soon. With the typical closing song „Never Forget“ we got another round of confetti coming our way. The 3 guys went off the stage with a big bang. Even now, only writing about this, I still get goosebumps. The best part of all of this is, it’s not over yet – at least for me 😉 Take That are coming over to Europe in October, they will be performing at the Hallenstadion in Zurich on October 12th. There are still some Tickets left on Ticketcorner.

Here’s my video of Patience. Patience, I’ll definitely need some of that for the next couple of months… 🙂

These are only a small amount of pictures I took. If you want to see all of them, head over to my Flickr Account…