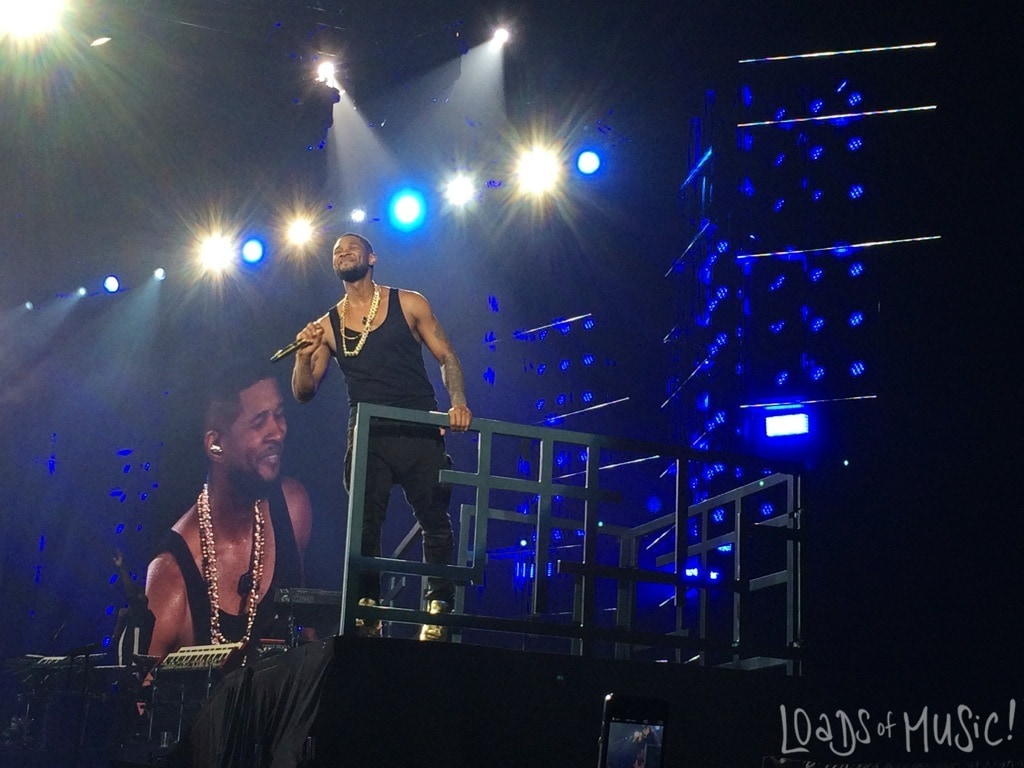 The last time I saw Usher perform, he played infront of maybe 150 people in a small club in Holland. I’m not sure what year it was, but it must’ve been around ’97 or ’98. A lot as happened since then. On Friday, Usher performed at the Hallenstadion in Zürich.

After Nico & Vinz were done with their set, Usher made his first appearance a little before 9pm. The stage was about the size of the entire club I’ve seen him in last time 😀 You could see his band in the background, there were a lot of lights and you could see that this is going to be a big show and that we will be in for a treat. We didn’t have to wait for long… During the first couple songs, we got to see incredible dancers, a great band, and a pretty decend entertainer as well. I have to admit the sound wasn’t too great in the beginning, I barely heard Ushers voice. But maybe that had to do with where we were standing… Nevertheless, we got to witness a great show. I was a little bit disappointed, that one of my favorite songs came up very early in the show. “U make me wanna” was the song that got me hooked back in the days. But as most of you probably know there were a lot of other great songs that were waiting for us. I’m not the biggest fan of his newer work, because for me it’s not the typical R&B sound anymore. Too much dance music, but still, the show was great and the fans went crazy. You were able to purchase early entry tickets, which I think were sold out pretty fast. You could see that the people in the front row where ecstatic and had a great time.

The part where he usually lets dollar bills rain on him, was pretty hilarious. Apparently he does that every night and uses money of the country he’s in. Of course with the one Frank coins, the whole thing is a bit more painful. At some point and one of the coins even stuck to his arm 🙂 during the show he ran from one side to The other, making sure everyone was able to see him, he danced, he saying and it seemed like he had a lot of fun. They were a little pillars in the mail the stage I made him or sometimes his band rise up. So even us little people were able to see him for further back 😉

Little later in the show he even sat down at the drums and showed us that he doesn’t only dance and sing but he can actually play a decent set on the drums as well.

Another little highlight for me personally was, when “Caught Up” was played. I don’t know why but that is one of the songs that always makes me jump around and dance. But of course most of the people that were there probably don’t even remember his old songs. Pretty sure most of the girls up in the front rows weren’t even allowed to drink yet 🙂 so they were all waiting for his big hits that came up in the last couple years. They did have to wait quite a while most of the big hits he had, didn’t come up until the very last part of the show. Be it “DJ got us falling in love” or “Scream”, the crowd was having a great time everyone was jumping or dancing. Considering this was a show in Switzerland, I must say the atmosphere was pretty awesome!

One of the last songs was one of the tracks I used to listen to a lot, especially while I was still going out to parties. “Yeah” Was the song that was played by every hip-hop DJ in Switzerland, or at least that’s how it felt. 😀 so yeah, the show is coming to an end, and I do have to say it was a great show. Even though nowadays I prefer smaller, more intimate gigs, a big production like this one, is pretty awesome every now and then! Unfortunately I don’t have a lot of pictures for you this time, I cannot believe that my camera just broke the minute I got into the venue 🙁 I guess it’s time to get a new one… 🙁 thank God for iPhones and the possibility to get pretty close to the stage even though you weren’t waiting in line for hours 😀