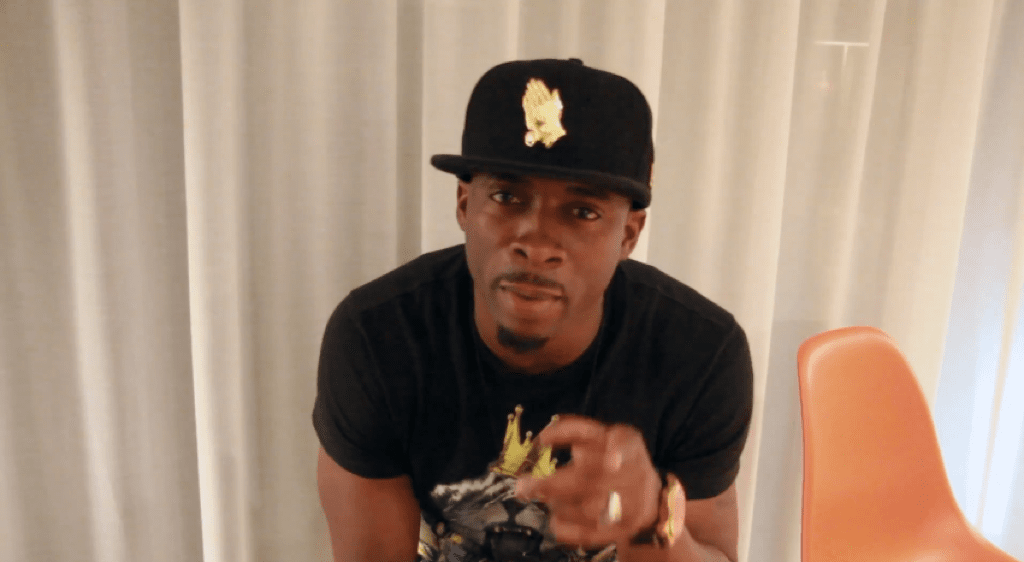 We got to sit down with King Pharaoh Jackson while he was on tour with The Game. Here’s what he has to say 🙂 In case your speakers don’t work or you just can’t listen right now, we’ve put it all down in written as well. Enjoy!

If you could choose any artist, who would you want to work with, dead or alive?
Dead or alive hmmm. There’s too many for me to name just one…. It’s hard! I can’t have three?

Are you currently recording?
Well, we’re touring, but I’m always writing on the road and inbetween, whenever I can I record. I’m working on my first EP which will be out early first quarter next year. And I’m also simultaneously working on my album and working on „The Documentary II“ with The Game.

What was your most succesful part in your career so far?
Ah, well, we released two singles. One of my songs featunring Tyga, it’s called „Take That“ it’s track number 12 on „Year of The Wolf“ – Get it! 😉 It’s been played online, social media and on the radio. So for it to get so many plays without me or Tyga in the video it’s pretty cool! And then the other song i’ve been on is called „Don’t Shoot“ with The Game, Rick Ross, 2 Chainz, Diddy, Wale, Fabolous, Problem Curren$y and so many more – I don’t want to leave anybody out… We did this as a way of using our power to speak against this injustice that’s going on in America and how they are executing innocent unarmed young black males. So we did this song „Don’t Shoot“ and it’s probably played millions of times. We’re getting the video done pretty soon – once we’re off tour. I don’t look at just downloads or album sales as success. Success is making an impact, you know, in the community and making the world a better place – that’s true success. You can sell a million albums go platinum and not really impact the world. That’s not success in my eyes, yeah you got the numbers and all but you’re not impacting the world.

If you finish a song, who is the first person you share the song with ?
Oooooooh, well, that’s challenging because I listen to it and I’m very critical of my own work. But a lot of times I play it for my management team, Leila Steinberg… And then there’s Vanessa, my wife!

How do you deal with negative press?
I take a next try. It’s showbusiness… You know, people at the studio, press, whatever. There’s people that have good things to say and people that have bad things to say. But at the end of the day if they talk about the music, I’m happy, I’m pleased, because they’re examining my work. I want to be known for my work, not the soap opera stuff. I don’t judge anybody for what they do to get their money… But as long as they talk about my music I’m pretty content.

Ok, so I started a sentence and you’ll finish

If I had a pet pig, I would… Well I’d have a ranch somewhere in New Mexico and that pig would be very good and I wouldn’t let him get killed because probably my boys will be attached to him J And that pig will be in shape!

The first thing I do when I get into a plane is… I locate the coffee, yeah! Because as long as I got the coffee, I’m good!

McDonalds or Burger King? Easy! McDonalds! Because McDonalds is always open… I used to do construction with my grandfather when I was a kid. And my grandfather used to say, we’re going to the golden arches! I love their fries too. In Milano, at the Duomo, they had a McDonalds over there, I asked for coffee and they said upstairs? Upstairs?? I went upstairs and there was a whole coffee, cheesecake thing up there. I love McDonalds, I like your McDonalds here better than in America, I mean, they do it right here. I’m not knocking America, but America you need to get your act together…

Winter or summer? Surprisingly I love the sun but in winter I really get to dress up and go outdoors, I love winter, I grew up in the winter. I went through all seasons. But I don’t have a preference I like summer, but they’re too different.