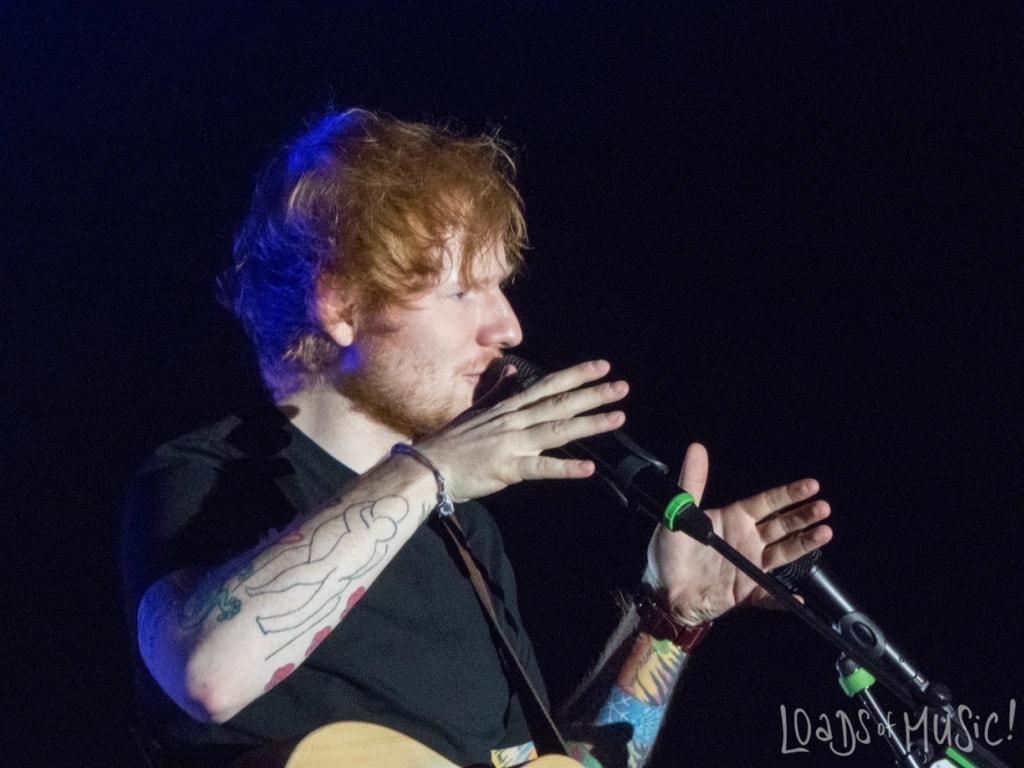 Not too long ago he was still a newcomer and “the one to watch”. Today Ed Sheeran is playing in the highest league! Selling out arenas and all. On November 19th he was once again back in Zurich. I’ve seen him 4 times already, but after seeing him in mostly small venues, I did have to cave in and go to a bigger one. His show at Maag Halle was sold out within a very short time, just like most of his gigs.

The two support acts Ed had playing before him were pretty great! Jamie Lawson and Saint Raymond did exactly what they were expected to do. They entertained the crowd in their very own way. Saint Raymond in a rocky way while Jamie Lawson had the girls swoon and drool 🙂

Around 20:30 and pretty much on time Ed Sheeran went on stage. The party is finally getting started! From the very beginning Ed promised that we’ll be having fun these next 2 hours. The audience who was mainly female and in their late teens (or at least that was what I saw around me :)) was ecstatic. There was screaming, cheering and jumping involved. Every now and then there were some loud “Ed I Love You” screams finding their way to the stage. Ed smiled politely… Yep, the british red head sure seems to be popular with the girls

People who might not know Ed’s CD’s by heart definitely had a great time too. This show was quite an experience, to say the least. His setlist was packed with hits and great songs. “Lego House” for example was one of his first hits, and also one of the first songs he sung that night. I keep looking around and seeing all these happy faces. A lot of surprised faces too. Even though I’ve seen him a couple of times, I still catch myself being in awe and full of admiration. I still think it’s amazing how this guy gets up on stage and has the audience eating out of the palm of his hand. Especially because it’s just him on stage. No big band to back him up. It’s just him and his guitar. Ok… And a loop pedal. But that’s it. He sure is an entertainer and a great musician as well. You can definitely tell that he’s enjoying being on stage. You can tell that he’s really liking the smaller venue. “As an artist you work hard to be able to play large venues, but once you get there, it’s always nice to go back to smaller ones” – his words during a short break in between songs (maybe not exactly the same ones, but that’s at least what he meant). Every now and then he mashes up his songs and adds short snippets of some really cool covers. That’s how Ginuwine (Pony) or Blackstreet (No Diggity) made it to MaagHalle too. Here’s a nice example:

As usual the really big hits or at least the latest ones are kept back until the end of the show. “I See Fire” was one of those songs. I sure had some goosebump-moments. I just really like this song, it always seems so mystical to me. After 2 hrs the show unfortunately came to an end – of course we would all have loved some more. But after the encore it definitely was over. I did find it a bit weird how Ed left the stage. The song was barely over when he already started walking off the stage. No goodbye or thanks or anything. He was gone and the lights went back on. Oh well, nevertheless it was another great show. Friends of mine who haven’t seen him before were super excited and really impressed. I was too, even after seeing him for the 4th time.

This show must have left some more people impressed. Up until a couple of days ago there were still a few tickets left for Ed’s gig at Hallenstadion in January. But it looks like it’s sold out now… Not bad Mr Sheeran, not bad!