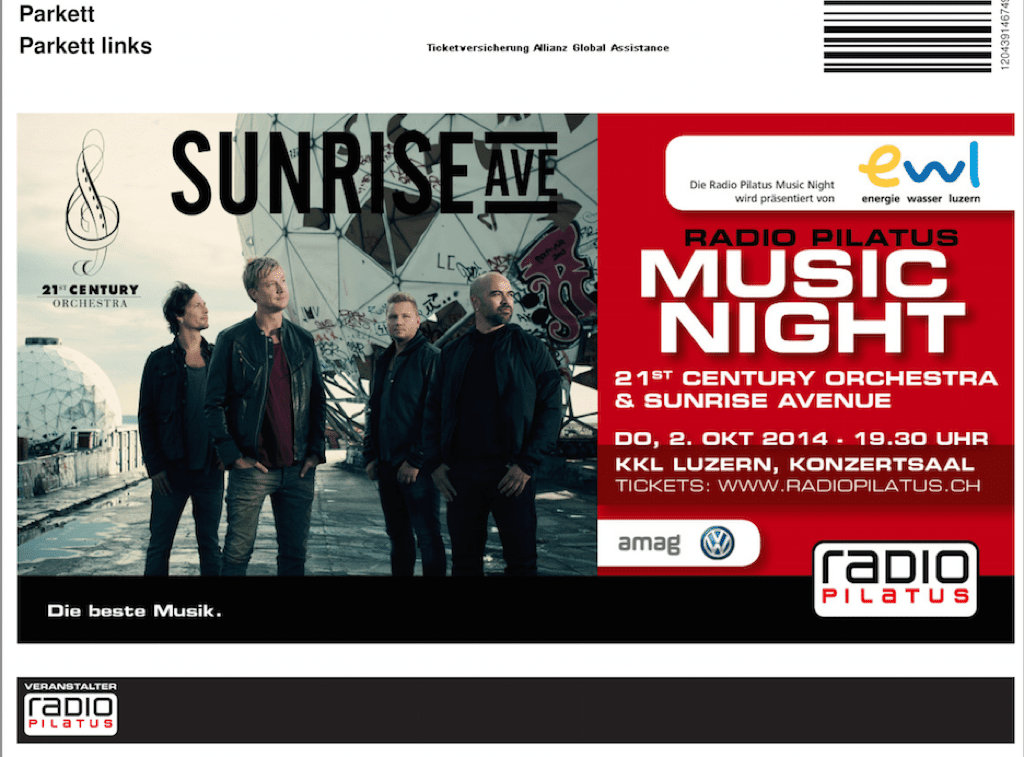 What a great concert! For us, this was an amazing experience, which we have Universal Music Switzerland to thank for. It just took a few hours, for all 3 Sunrise Avenue concerts with the 21st Century Orchestra at the Luzerner KKL to be sold out.

On Friday, October 3rd we gathered together with other 1900 visitors at the KKL in Luzern. This concert venue is known for being one of the best venues for classical concerts, and all of its seats have direct view to the stage. For the first time in their career, the Finnish band performed together with a 60 men orchestra on stage. So, the five Finnish guys saw a dream come true – performing on stage with a full orchestra. Before the concert started with “Unholy Ground”, they kindly asked us not to take any pictures or videos during the concert; the band wanted their audience to enjoy their concert, without having to keep an eye on their cams or cell phones.
And so we did. So, today we will provide you with a concert review, without pictures or videos of it (despite the “rules” you’ll still find plenty of videos on YouTube)

A little bit after 7.30pm the musicians took their seats on stage, and the lights went down in the hall. We started to hear some drums and the first notes of “Unholy Ground”. All the audience was immediately connected to the 5 Finnish guys and the orchestra. The third song they played was “Forever yours”, which is usually kind of rock-ish, but they made an amazing ballad out of it, and we could see the first fans taking out their tissues to clean their first tears – it was quite emotional. They kept on playing many hits, mostly from the album “Unholy Ground”. They were all very special, played together with the orchestra.

The whole concert was just stunning. Their first hit “Fairytale Gone Bad” was played in a totally new version. It was just unbelievably beautiful! Especially considering that this song was the one with which the orchestra had more to struggle with, when trying to play it with their instruments, as Samu said. Samu also mentioned how amazed he was of the orchestra managed by Ludwig Wicki. They really did a great job!

Just before the break, Samu talked to the audience again, mentioning that the Best-of album “Fairytales” is out since Friday. That album also included some new songs, and they wanted to play one of them, so they played “Nothing is over”.
The concert ended with “Hollywood Hills”,  or so we thought. After a few seconds, Samu Haber came back on stage revealing a little secret. The band was going to play “Nothing Is Over” once more. Not just for fun, but they actually wanted to film the whole thing to use as or at least use parts for their video clip. He also said something he’d never think he’d ever say. We should all try to sit very still and be quiet… Well, we did and we certainley enjoyed it too. This then was the last song. The band and the orchestra walked off the stage, leaving their audience overwhelmed with emotions and completely amazed. We went back home knowing, that we just experienced a first class concert. Thank you so much!

The best of album “Fairytales” is out since Friday October 3rd 2014. You will find all their hits from last year on this album. So, whoever wants to have them all together in a single album, go ahead, and buy the cd!