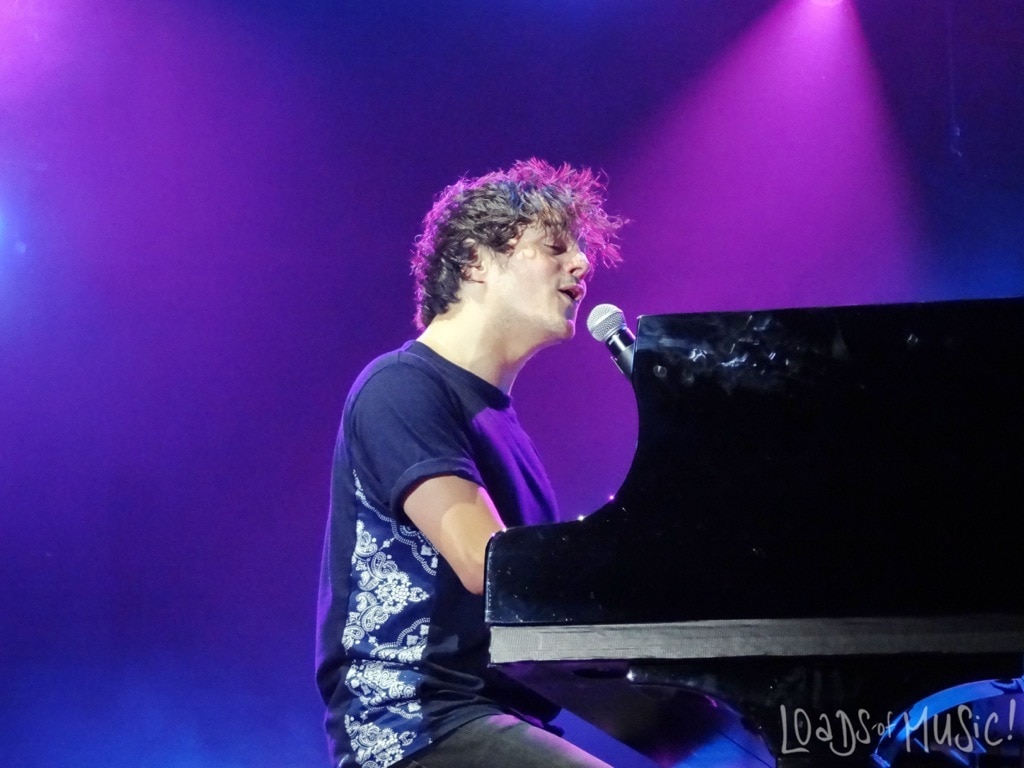 He’s back! Jamie Cullum is finally back and playing at this years Live at Sunset and unfortunately yet again in pouring rain. Last year I was lucky enough to see him at the Stars in Town Festival in Schaffhausen, in pouring rain…

But just like last time, Jamie couldn’t care less about the rain and put on a great show. A few minutes after 8.30pm he came walking across the stage, went over to his piano and started to play. Since we were all sitting there in our blue little ponchos, we were just waiting for a comment from his side. Aaand we didn’t have to wait very long. A few minutes into the show he said we looked like a sea of blue condoms – and he means that in the nicest way possible of course 🙂 Oh, and THANK YOU Live at Sunset for providing those ponchos free of charge, me an many others would have been soaked to the bone without them!

At first the audience was a bit… hmm let’s say reserved… But honestly, the weather was so yucky, I couldn’t blame anyone for not wanting to get up and dance. Every move meant having another stream of rain water wandering down the chair and on your clothes 🙁

Jamie definitely has a way of mixing Jazz with Pop, Soul or Blues – I guess he’s well known for that ability. But personally I think that he’s even better when performing live. Every now and then he let’s his musicians shine, giving them time to show their talent. A couple of minutes of just intrumental passages, where Jamie himself just stands there and enjoys the music.

Just like last time, he wouldn’t let only us get wet. Those of you who know him won’t be surprised that he hopped off stage to walk through the audience, climb over some chairs, obvioulsy get wet and then steal a fans phone to film the rest of his performance to that song. What a lucky girl, I sure hope that video will surface on YouTube soon! In the meantime, why don’t you have a look at this great video. Blackbird (a Beatles cover) and Save Your Soul:

After a while he pretty much begged the fans to get up and come to the front of the stage. Well, he only had to ask once. A quick jump over the front row seats and I was up there, with a bunch of other fans. So close! Finally I could start dancing without having to worry about the people sitting behind me. Up there I also managed to get this video of Gran Torino. This song, by the way, got Jamie Cullum a Golden Globe nomination (it was written for Clint Eastwood’s movie „Gran Torino“).

In the meantime it had started to pour down again. It seemed like heaven was starting to cry because the show was over pretty soon. Nevertheless, I totally enjoyed the last minutes up close. I was dancing away, so was everyone else up there. Yes, it was yet another great concert evening – even though it was another wet evening. Jamie Cullum might look like a 20yr old kid, but oh my, he is one of the most talented musicians I’ve seen. And so underrated…