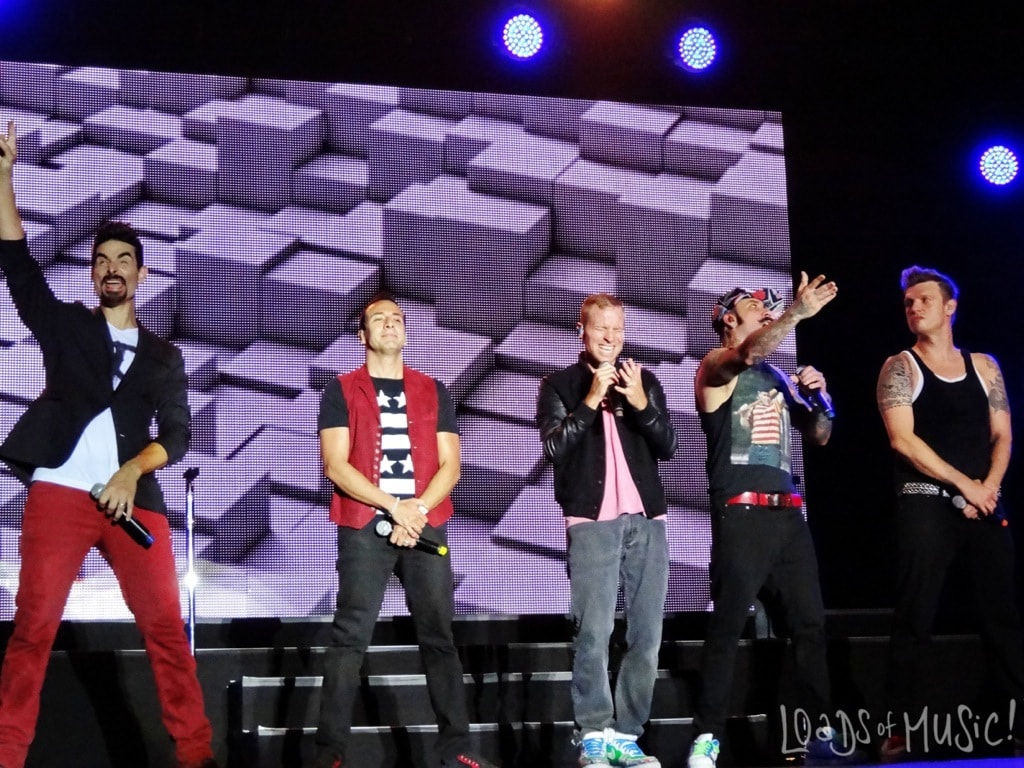 Backstreet’s BACK! If that isn’t reason enough to feel like a teenager again, even for just an evening? One of the biggest boysbands oft he 90s is back in Switzerland: The Backstreet Boys . Moni and I were and still are fans and of course wouldn’t miss this. With a little luck we could experience the slightly different Backstreet Boys concert in the front row. With „slightly different“ I mean: no pushing, no running and no fighting for a good spot 😉

A few minutes after 8.30pm the show started. The video wall in the background was preparing us for what was to come! Before the guys were on stage the entire audience already jumped up from their seats – just the way it should be ;)) Seconds later there they were, the 5 guys were on stage. Just as expected the crowd was ready to go crazy – and they did! Since almost every song they released was a hit, we wouldn’t have to wait long to hear one of them. Nick Carter got his guitar (yes, he plays the guitar!) and one of my favorite „new“ songs came up. It was time for „Incomplete“.

By now we all know that these guys aren’t little boys anymore. 4 of the 5 guys have become loving daddys in the meantime. The song „Show ’Em (What You’re Made Of)“ was written for their kids – how cute is that? On the video screen we keep seeing pictures of the band and how they’ve evolved. It’s a trailer for their soon to be released movie – just getting a little excited about that 🙂 Can’t wait to see it.

Every now and then the guys even bust out their old dance moves. Maybe not quite as in sync as back in the days, but the audience still loved it and cheered them on a little louder. „All I Have To Give“ is one of those songs, even the old hats came back out 🙂 But also the really old hits were on the setlist, be it „I’ll Never Break Your Heart“ or „We’ve Got It Goin’ On“ – everything was on the list. Gosh, I haven’t felt that young in a while! My personal favorite from back then was „Quit Playing Games (With My Heart)“ – I still get goosebumbs when listening to this song, so many memories!

It was great! I’m pretty sure most of the people there enjoyed it too. It really was just like time travel. Not only the band has aged, but so have we fans – we must now all be in our early thirties at least. What a great experience to be thrown back to your teenage years. Of course, I still chuckle and smile about the kind of music we loved back then. My taste in music has changed a bit since then, but nevertheless I still really enjoy these kind of shows. The dance moves might seem a bit over the top for some, maybe even a bit embarassing, but somehow it still seems to be part of the show, right? At least they don’t dance to every single song anymore haha.

All in all it was yet another great night up at Dolder. Honestly, I didn’t quite expect it to be this great. Shows with all seats can sometimes change the atmosphere, even hold back emotions at times. But this was definitely not the case this time!