Interview with Baba Shrimps in Winterthur 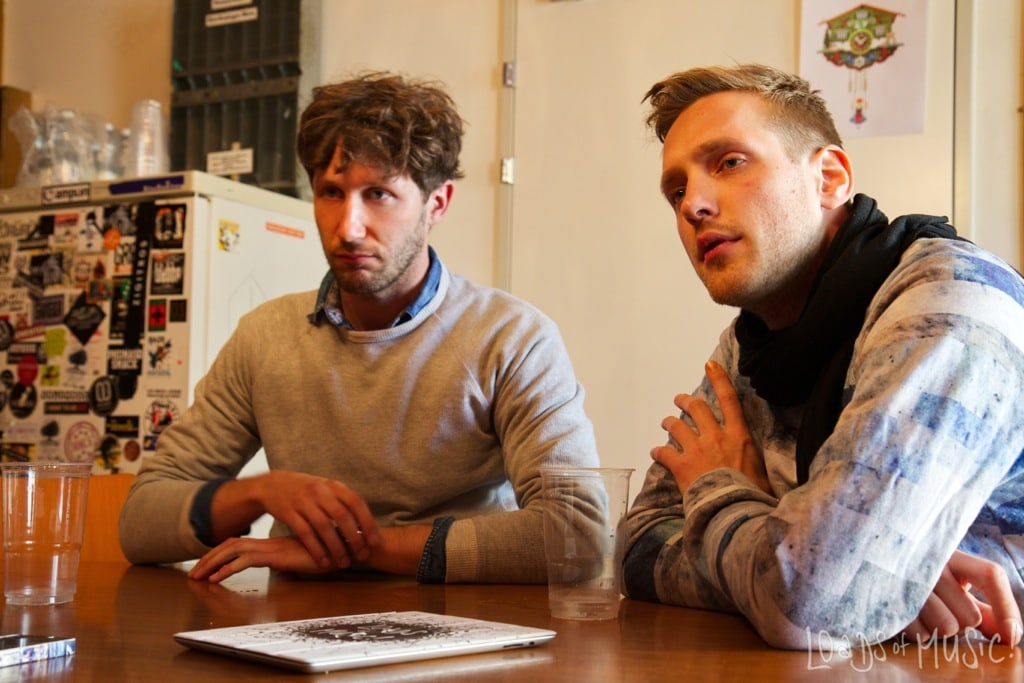 Right before their show at Salzhaus in Winterthur, we were lucky enough to meet Adrian and Moritz of Baba Shrimps to pick their brains. If you want to find out which one of them was impressed by Katie Melua, keep reading.

Alright, tell us, which one of you is the Forest Gump fan? We were able to read that your band name was inspired by the movie? Is that true?
Adrian: Yep, that’s correct. We are real fans of that movie, especially the story behind it. That’s how we decided on the name.

How did you guys meet and when was the band founded?
Adrian: That must have been 8 years ago now. Rene and me met at school during our training to be nurses. He had already played in bands, while I just made my experiences here and there. When one of our school mates was getting married a while later, we had the idea to play at her wedding! That’s basically how everything started. For some odd reason the wedding-gig didn’t happen, but nevertheless we loved the idea and kept going.

Beginning of April your new album “Neon” was released – was it different for you to record this album compared to your earlier works?
Adrian: Yes… Pretty much… A lot…
Moritz: Our other records were only EP’s, so that alone was different. On our very first EP we did everything ourselves. Produced, recorded etc… Now for this one we were able to record at a nice big studio – we just generally had more possibilities and people to work with. But still we did do some of the work in our own little studio as well. But all in all it was quite a different way or working.

You are being handled as THE big newcomer in Switzerland – a lot is being expected from you: curse or blessing?
Adrian: Of course all the attention is a blessing! We really appreciate that. It’s not like we’re doing anything different, we’re still doing the same thing, but now we have a broader audience – I’d say it’s definitely a blessing.
Moritz: Yeah, we’re still working hard and giving it all we have. Just for way more people than before – blessing for sure.

Naturally you’ve gained a lot of new fans – Do you have a fanclub yet?
Adrian: (laughing) No, not that I know of, at least nothing official. But of course we have returning fans coming to our shows.
Moritz: Exactly, we have more and more people coming to our gigs. We’ve gotten to know a couple of people just by seeing them at different shows. Of course we enjoy seeing these loyal fans and take the time to talk to them after the gigs.

Imagine someone standing in front of you who has never heard of Baba Shrimps before. How would you explain your music to them in only 3 words?
Adrian: I’d say a mixture of folk and pop songs and some electro elements…
Moritz: Adrian, she said 3 words… Three!
Adrian: Ok, well, in that case: Folk, Synthesizer and Pop

Your tour has just started, what’s a typical tour-day for you guys?
Adrian: At the moment we’re not really on the road for several days. I think Zermatt was the last time we were gone for several days…. Anyways, we usually meet in our band room, load all our equipment in the van, drive to the venue, soundcheck, show, sell merch and talk to fans and then we pack our things and drive back to the band room where we unload everything again.

So you still do everything yourselves or do you have a crew that helps out?
Moritz: We luckily did get some help and people that support us at shows. Different technicians, merch people etc. The crew around us is growing. This certainly doesn’t mean they carry our stuff around, we still do that ourselves!

Sarah: What would you like to be asked at interviews and what do you certainly not enjoy anymore?
Adrian: We’ve noticed that quite often people ask us the same or at least similar questions. Of course that is understandable, like the question about our band name – after a while we do think to ourselves ‘you could have just read that in another interview’. Like you guys, you didn’t specifically ask about the name, but gave some thought to it and asked about the movie – we like that! (pheew – lucky us!).
I also enjoy when we get asked about our music. About lyrics or the meaning behind songs, stuff like that…

Daniela:With which international act would you like to be on stage with?
After a long period of silence, Adrian asks Moritz if he has anyone in mind. To make it even more difficult, we mention that the act could be living or dead….
Moritz: with the ones that have passed away I’m just sad that i missed the opportunity. I would have loved to see Led Zeppelin in the original formation. I was born too late… But then again, we did have the opportunity to open up for Kodaline a few months ago – which was awesome! This way we could play on a large stage and experience how it felt up there.
Adrian: Oh yeah, in Zermatt I was able to sneak a peek of Katie Melua during her soundcheck – I’d like to be on stage with her.

Eva: What is your inspiration in life?
Adrian: definitely life as such! I don’t think you should narrow it down to certain things like women, politics and stuff like that. I think our daily lives are inspiration enough.

We never go on stage without…
Adrian: We always come together as a group and build a circle right before we go on stage, basically our little „Circle of love“

When I open my internet browser I see…
Both together: Google… boring…
Adrian: But you should see the second site – way more interesting (he didn’t want to elaborate on that though… 🙂

If i was a capricorn, I would…
Adrian: I am a capricorn! Ok, so if I was a real Capricorn, I’d try to climb up the Matterhorn!

I usually do my laundry…
Adrian: always on sundays
Moritz: somhow always very late at night…

Guess what, before getting ready for the show as Salzhaus in Winterthur, the entire Band signed a CD just for you! Enter our contest to win a signed copy of „Neon”

How to win?
1. A “like” on our Facebook-Page would be great, sure Baba Shrimps would be happy about a like as well
2. Comment on this blog post with your e-mail address (address will not be published) so we have a way of contacting you in case you win.