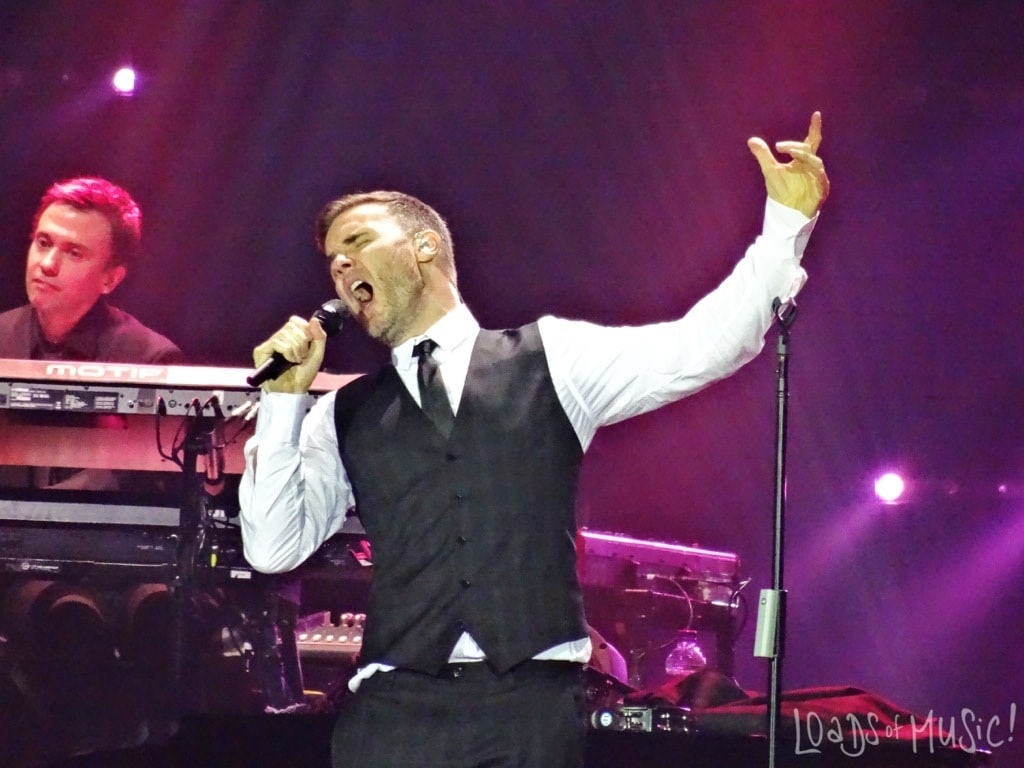 Yep, I did it again. I went on another trip… I was lucky enough to get tickets to one of Gary Barlow’s shows at the O2 in London. The lovely Nicole from Princess.ch joined me on this journey, since she has been a Take That fan for almost 20 years too. Needless to say we were super excited ever since the tickets were bought. Let’s go to London!

Right on time at 8.30pm the lights in the arena went out! On time like swiss watches, just the way we like it… The audience, that was surprisingly mixed, was shown a little movie with different “Gary-Moments”. The stage had several screens to make sure each and every one was able to see what was going on. The musicians were ready and only seconds later the man, the captain, was on stage! Charming, sexy and chic – just how we know him. Not long and the first big bang appears. To “Greatest Day” there’s the first big confetti rain… And yes, I am still finding yellow confetti in my bag today! The next highlight is just around the corner: “Pray” – not only a highlight because it was the first Take That song to go to Nr1 in the charts, no, but especially because Gary still does the old dance routine – and we all know he’s not the best dancer, but it looks adorable when he does it 🙂 See for yourself:

For one of my favorite songs “A Million Love Songs” Gary brings up one lucky lady on stage. This time it was a girl with a self-made GB-Tour-Shirt and blinking devil horns on her head… She got to sit up on stage at his piano, looking towards Gary. Funny detail that Gary had also noticed and mentioned after the song… The lucky girl sat there starring at her phone the entire time. He said something like: “She didn’t even look at me for a second?! She probably checked some e-mail, aah there’s a text from mom, let’s tweet that” – the audience laughed, I guess one person in the audience was a bit embarrassed 😉

The short guest-performance by Eliza Doolittle was a bit disappointing in my opinion… She was invited up on stage to sing “Shine”, a Take That song that is usually sang by Mark Owen. Poor little Eliza… I think her voice isn’t really that great, it didn’t help that we could barely hear here.. So, apologies, but that’s a thumbs down from me. At those 2 concerts at Royal Albert Hall back in 2011, Olly Murs sang Shine with Gary, this is how it’s been done!

After a beautiful acoustic session and a cool swing medley (yep, he can swing as well – and he’s good at it too!) the best part of the show has come. A medley with the most beautiful ballads. Aaaaaah, my heart has definitely started to beat a bit faster at that point. On his way to the B-Stage (which was located smack in the middle of the arena) poor Gary had to make his way through a bunch of crazy women wanting to hold him, kiss him and possible do other things to him 😀 The screams have started to get really loud too. With a rather unsexy hop over the last seat row and a short sprint towards the b-stage I was right there too 😀 I was ready to get a handshake from my first big love – and I got it, and a bit more than that hahaha (I was soooo close)

Time has certainly been flying by! The first signs that the show will soon come to an end have arrived. Elton John was projected to the screens during “Face to Face”. It was almost as if he was there. When the first rain drops appeared on the screens every Take That fan knew what was about to come. “Back For Good”… Followed by 2 up-tempo songs that got everyone dancing their butts off!

Gary is now announcing the “last” song… “Rule The World” – adding with a grin, that if we clap loud enough, they might come back on and sing another (very well and often rehearsed) song.

And of course they did… And just like always, the closing song was the Take That hit “Never Forget” *Arms up in the air and clap*. Writing about this gives me goosebumps again! A great evening is coming to an end… A little ray of hope at the end: “See you right here next year with Take That” – and again screaming and cheering from 20’000 people including Nicole and me.

And yes, it was totally worth the trip and I would do it again!

I wonder, did any of our readers go to one of Gary’s shows, or will go on this tour?