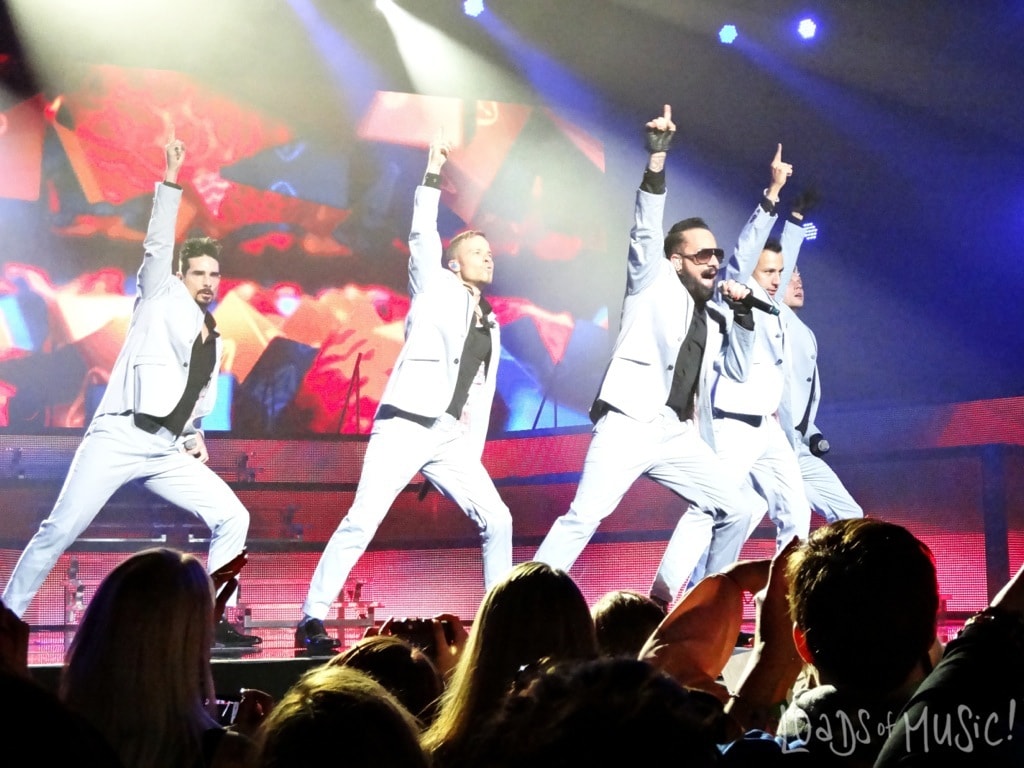 The Backstreet Boys finally came back as a 5 piece and performed in Zurich at Hallenstadion, of course I was there too, in the very front – naturally! Back in my youth I was totally addicted to this boygroup, no question that I’ll have to be at this show.

It’s 9pm, almost 20 years after their big hit “We’ve Got It Goin’ On” was released. The are infront of the huge stage had an extra sector for fanclub members only – how cool is that? The 5 guys have definitely grown up, not to mix up with growing old 😉 In perfectly tailored white suits they walk down the stairs. The opening song “The Call” is a great way to start the show. Also the fans grew up with their idols. No more passing out anymore, however, the teenie-mode is turned on within minutes after the guys got on stage and especially during the 90’s hits like “Quit Playin’ Games With My Heart“ or  „I’ll Never Break Your Heart“. There was a lot of cheering, sometimes even screaming going on. Just like in the good old days.

Also the dance choreographies to songs like “As Long As You Love Me” or “Everybody – Backstreet’s Back” are still the same as 10 years ago. The crowd was going nuts and of course sang along to every song

During the song “Madeleine” (which was played in a beautiful acoustic version) a couple of fans were able to get up on stage with the band (let’s just say, this wasn’t just a goodie for some lucky fans – you just needed enough money to get special VIP tickets…). I personally really like this song off the new album “In A World Like This”. Especially in this version, Nick Carter’s voice really comes out nicely.

But of course the other “Boys” were fascinating. Brian is still the clown on stage, Howie showed us some hot latino-dance moves (check out the video), AJ was super cool and Kevin was charming as ever while he said hello to some lucky girls up front, shaking their hands.

With “Larger Than Life” the show was coming to an end. The 10’000 something, mostly female, guests knew it was over, probably faster than they wanted it to be….

Dear husbands, boyfriends or just friends, sorry, but BACKSTREET’S BACK! For sure! And, they will be back again. They’re playing at the Live At Sunset Festival on July 17th and at Moon & Stars Festival in Locarno on July 19th. Yay!

The only „downer“ of the day: a couple of days before the show, Ticketcorner.ch actually sold those fanclub member-only tickets for HALF the price! Pretty scandalous and not acceptable if you ask me. I sent a  complaint to the concert promoter/organizer directly. If any of you were affected by this, you should too!