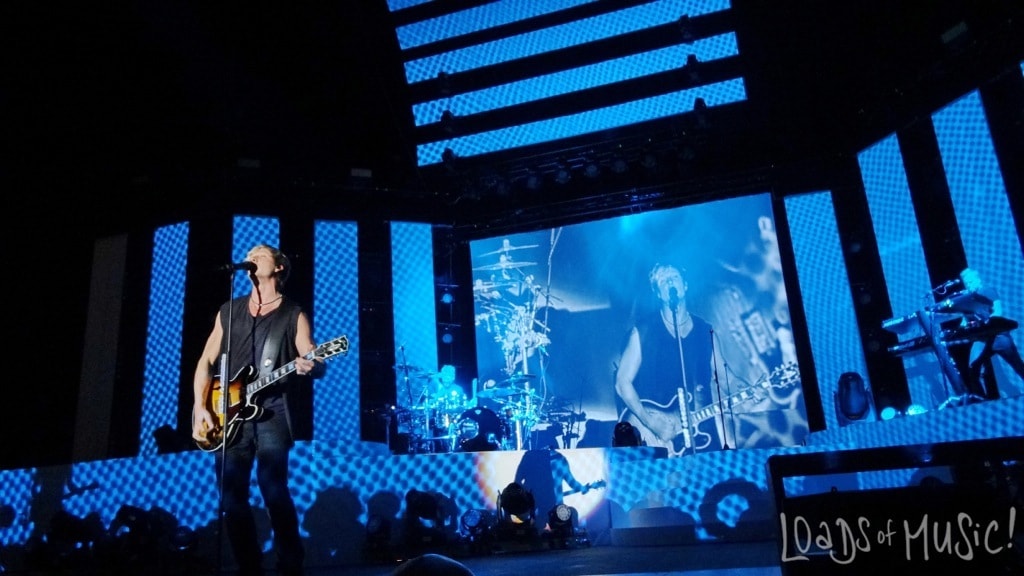 The Finnisch band Sunrise Avenue has definitely won loads of fans after lead singer Samu Haber was on the jury of “The Voice of Germany” last season. This was definitely one of the reasons why the show had to be moved to a bigger venue. Not bad to upgrade from Maag Event Hall to Hallenstadion…

The supporting acts Ryan Keen and My First Band helped warming up the crowd and killing time until the 5 Finnish guys got up on stage.

Right on time at 9pm Samu Haber (vocals and guitar), Raul Ruutu (e-bass and backing vocals), Sami Osala (drums), Riku Rajamaa (lead guitar and backing vocals) and Osmo Ikonen (keyboard and backing vocals) appear on stage accompanied by the deep bass beats of „Unholy Ground“.
Wow, it does feel different seeing the band up on such a huge stage! To say it with Samu’s favorite german wrod from The Voice – „Hühnerhaut“!
One of the highlights during the show was „Lifesaver“. Especially the members of the Fanclub „Swiss Crew“ were looking forward to this song. They’ve organized a little something for this moment. Hundreds of balloons were held up, in the middle of the „balloon ocean“ there were some rescue rings – little „Lifesavers“. The big smiles on Samu showed how much appreciated this was!

Almost all of the songs off the new album were played, the fans loved it, sang along and partyed hard!
Once they played their first hitsingle „Fairytale Gone Bad“ the atmosphere hit its peak! 10’000 people were singing along every single word to the song! Pretty awesome!

After about 1.5hrs the band was leaving the stage. The audience sure wasn’t ready to leave though. Eventually all the stomping, cheering and the mexican wave brought them back on stage. The one song most people know was coming up: „Hollywood Hills“!
The audience singing didn’t even leave Samu a chance to sing himself. Once he did manage to start singing there it was again – the goosebump feeling!

Unfortunately after that encore it was definitely time to go home. With the words „Vielen Dank, Thank You Zurich – See you soon at the festivals“ they waved us goodbye and left the stage.
Most of the fans were stil in awe and can definitely know now that Sunrise Avenue passed the test and can convince a huge audience in big venues!

Yep, we can definitely recommend going to a show on this „Unholy Ground – Tour“!