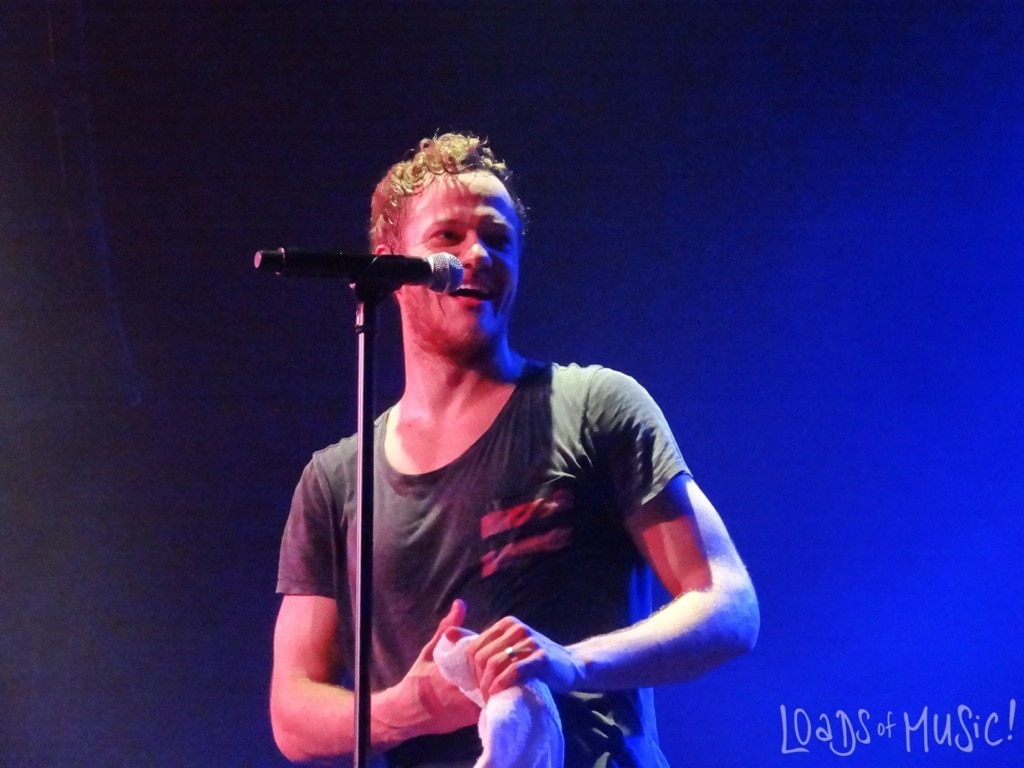 Maag Halle, December 9th… It’s time for Imagine Dragons! The second show in Zurich on this tour. Both shows sold out! Just a few months ago, probably only the people in the alternative-scene would have even known about this band. This has changed drastically in the last few months. The recent Grammy nominations therefore aren’t a big surprise!

Sometime around 9.30pm, the band walks on stage. The opener „Round and Round“ already brings out the gigantic Taiko drums that leadsinger Dan Reynolds will be hitting hard (also through-out the rest of the gig). The crowd is hooked already, clapping and dancing to the beats. When the band starts playing „Amsterdam“ Moni and I also start dancing – I love this song, so does Moni… Now 🙂

The show continues to be energetic. The band knows exactly how to get the crowd going, every single song off their debut album „Night Visions“ show the talent, they could all be singles on any radio station around the world. Very catchy songs!

Dan Reynolds keeps holding out the mic so the audience can sing along – and they did! Once the rythmic clapping intro of „Top of the World“ is being played, we all know the big hits are coming out now. Demons has been played already, so naturally one of the next songs must be the one that made me listen up a while ago: Radioactive! In my opinion a bit darker beats than the other songs, but nevertheless a great song. Probably one of  the best songs of the year, for me at least. But go check it out yourself, what do you think (yes, sound quality is pretty bad… but i guess that’s one of the downsides of being in the front row, right infront of the speakers…)?

Like at most shows, the big hits don’t come out until the show is almost over. No exception here. Shortly after „Radioactive“ this great gig has come to an end as well.

We did get one encore „Nothing Left to Say“… It was a great evening! Many happy faces and comments like „omg that was amazing“ or „wow, what an awesome show?!“ confirm that we’re not the only ones sad it’s over already. It was great! A very explosive and energy fueled show. They totally killed it! Our conclusion: 2 thumbs up ! And the good news? Yesterday it was announced that Imagine Dragons will be performing at the St. Galler Openair festival next year! YAY!