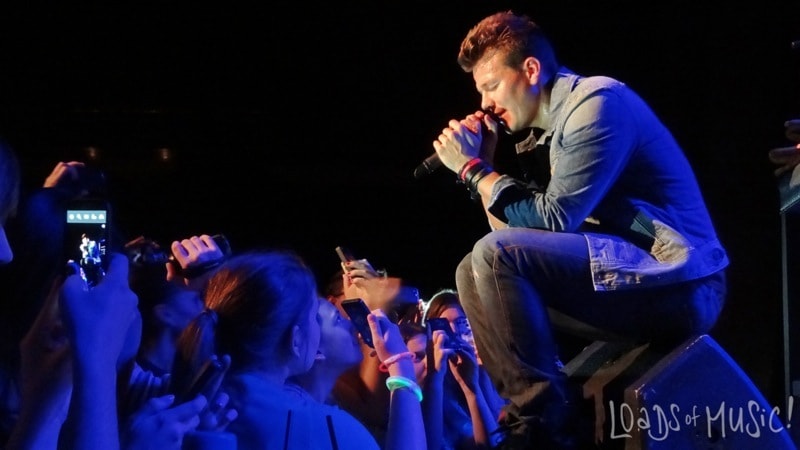 His YouTube-Channel has more than 330 Million hits so far, 1.3 million people have subscribed. Wow, those are some BIG numbers!

The wonder-child of the internet generation played a brilliant show at the Kaufleuten Club in Zurich on Saturday. We were there too! With his great covers and some of his original songs he totally won us over. With a bit more than 500 people we were still able to get a great spot to watch the show. For those of you who know us, we like to be up front 😉

The moment he walked on stage with his cool jeans jacket and his guitar, most of the crowd was already going nuts. Lots of screaming and cheering! With his little band (it was more of an acoustic show) Tyler managed to play himself into the hearts of the people. He offered us a lot of different music styles. Be it a cover of The Script’s “Breakeven” or Eminem’s “Lose Yourself”.
During some of his original songs, Tyler was surprised with selfmade paper hearts and confetti – the fans in the front row obviously are BIG fans 🙂

When he told us about his first love and the following breakup he started singing “Beginning of a Bad Idea” in a totally stripped version. Accompanied by just a guitar and at times even put away the mic. You could literally hear the hearts of the girls in the front row melt. Check out the video and see for yourself how the eyes of many girls started to glow:

Tyler always kept touch with the audience and entertained us throughout the entire show… Lively little dances on stage or IN the crowd even. After his last encore the 500 something fans sounded more like 5000 fans. Looking at their faces, they definitely had a great night. The show was phenomenal, a really great night! Whoever wasn’t able to be there but would still like to check out Tyler Ward, on Shirley’s YouTube Channel there are a couple more videos of the show.