The Script – the next big thing from Ireland after U2 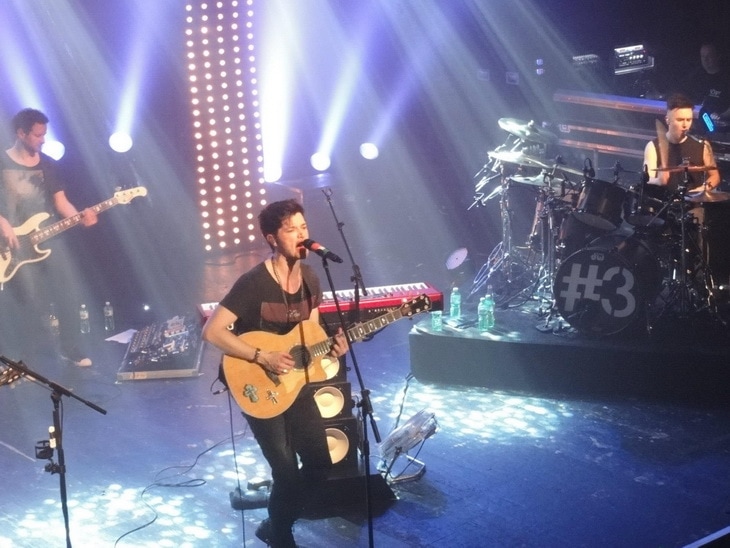 This article is a huge highlight for me! As many of you may know, The Script is my absolute favorite Band. Their music is quite rock style-ish as well as very emotional. Nowadays, they are conquering all the chartlists around the world, the same way they conquered my heart. I had the pleasure to see them live a couple of times and even meet them. I prefer The Script, when they play for a small audience, but I have also seen them perform for more than 10.000 fans in Manchester. It was an amazing and crazy feeling, seeing Danny and the Band performing for so many fans.

The Script don’t only just perform on stage, they also had a special appearance on the TV series Beverly Hills 90210 .Their songs are also being played on events like the opening of “Victoria Secret”:

Band
Did you know that Danny O’Donoghue and Mark Sheehan were, in the late 90’s, part of the (not very famous) boyband “MyTown”? Shortly after the band splitted up, their talent were new discovered. They worked as Songswriters and producers for many R&B Stars. After meeting Glen Power, they invited him to Los Angeles and started focusing on their own songs. During the time they recorded their album, Mark’s mother and Danny’s father died. These experiences made the band even stronger and they wrote songs like “If You Could See Me Now”.

Album The Script
With their debut single “We Cry” they conquered the hearts of the British public. They reached rank 1 in the British charts and received many platinum albums. You have to listen to the acoustic version of this album.

Album Science & Faith
After releasing their second album on September 10th, 2011 the guys had a small concert at the Guinness Storehouse in Dublin, were they performed the new songs and the second single “For the First Time”. Me and Shirley were lucky to win two tickets at a radio station.

With already 3 albums released, they have performed with artists like U2, Take That or Paul McCartney in huge stadiums. Danny is judge and coach at The Voice UK since its very first season. This is where he met for the first time Will i.am. and then, they produced together the first Single for their third studio album #3 “Hall of Fame“. With this song they want to teach us that everything is possible as long as we believe in it and never give up. You can hear that song on every single radio station, almost everybody knows it! …or you can use it as your waking up alarm clock, as i do 😉

The Script are spending plenty of time in their studio right now working on their 4th album. We are very curious about how it’s going to sound. I hope you learned something new about The Script now, and may be, I will meet some of you at a concert soon.