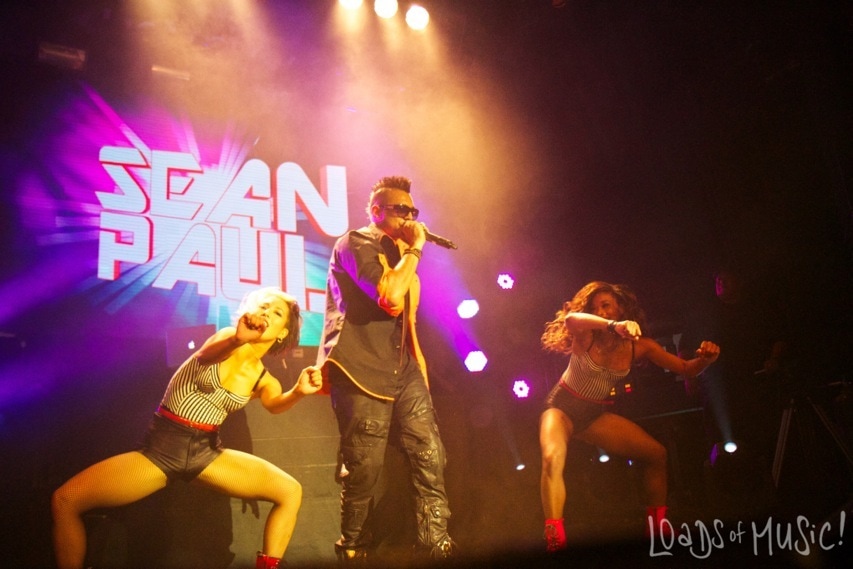 We don’t only go to „normal“ concerts, you can also find us at the special and mostly private Showcases. Thanks to Radio24 ,  20Minuten  and Samsung we were able to see Sean Paul at an exclusivce Showcase with approx. 1000 other happy winners.

The 45 minute Showcase was held at the Kaufleuten in Zurich. Even though it was freezing cold and dark rainclouds over Zurich, there were a couple of fans that were waiting in line more than 1 hour before doors would open – just to hear a couple of the new songs off Sean Paul’s new album „Full Frequency“ (in stores on 01.11.13).

Finally around 20:20 the lights went off and the DJ came up on stage, Just shortly after him 2 dancers came up on stage. A few minutes later the man oft he evening jumped up on stage – with sunglasses despite the darkness in the club (seems to still be cool ;))

To get the audience in the right mood Sean Paul started out with a couple of his big hits like „Gimme The Light “ and „Got 2 Luv U“. The crowd was happy! Not only the first couple rows were dancing and shaking their bootys, when I looked back I saw hundredes of hands up in the air. Then after only 40 minutes the last song came up. The Jamaican announced his current  single „Turn It Up“ and performed it without support of his 2 dancers. I think they’ve had enough 🙂 The Swiss audience was going nuts. It seems like the mixture of reggae, dancehall and dance-pop is still very popular! We liked it too!

As usual with these kind of things… it was over way too fast! Sean Paul did however deliver a pretty good show that will not be forgotten too fast. The rather disappointing march off the stage however was a bit sad. At the end of the last song he mumbled a couple of words, a quick „thank you“ and wandered off the stage. The DJ tried to keep the fans entertainied and hyped by playing another song or two, but then suddenly the lights just went on. No proper goodbye whatsoever. Well, at least we got some free sunglasses 😉